Is the World Swimming in Corn? 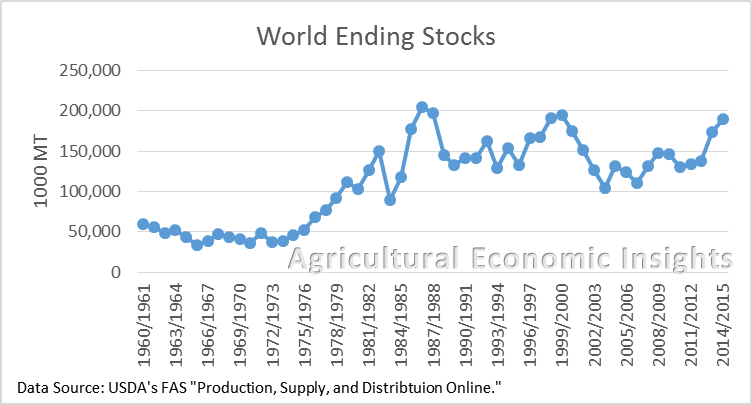 Recently I saw a headline proclaiming that the world was swimming in corn. The spin was that global stocks were approaching highs that haven’t been seen in more than 25 years. This was information that didn’t seem to fit my recollection of the situation so I quickly emailed David and asked him what he thought – I thought his response was right on.  Here it is ……….

Great question. I dug into this a bit and found that the story has elements of truth but is only half the story…

The latest WASDE estimate is for the current year’s ending stocks (2014/2015) to be at 189.9 million metric tons. This level of ending stocks would be the 5th largest world carryout, measured in total metric tons, in the available data set (since 1960). There are also a lot of unknowns for the current crop (U.S. crop hasn’t been harvested let alone consumed), so it stands to reason that the 1998 and 1999 levels could be exceeded. To the point of the article, if the current estimate for ending stocks were to increase by 2.5%, it would be the largest carryout in 27 years.

And while I’m sizing up records, if the current carryout were to increase by 8% or more, ending stocks would exceed the 1986/1987 high.

Okay, now the devil and his details or for the rest of the story.

As you suspected, looking at ending stocks from a relative measure reveals a much different and less alarming story. As most of us know ending stocks really matter relative to demand or use.  The current estimates of ending stocks as a percentage of total consumption is at 19.6%. In history, this is nowhere near a record and as you can see from the chart below, not even abnormally high.

Looking across the 54 years of available data, 44% of the time corn ending stocks were less than 20% of total consumption. This makes it hard to argue that the world is “awash” in corn.

Now, what about recent history? We haven’t experienced relative ending stocks to use ratio for corn at this level since 2002, or 12 years ago.  Furthermore, for the past five years global corn stocks relative to use have been consistently building; even during the unprecedented U.S. drought in 2012. 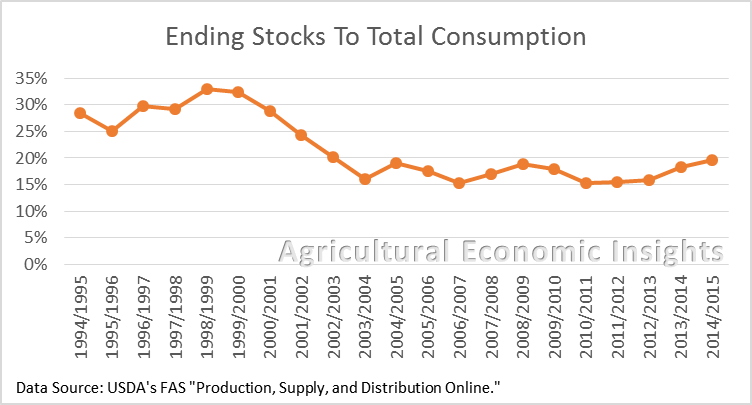 In short, there are a lot of bushels out there, but we aren’t quite swimming in corn when you consider current level of corn consumption.  The recent trend has been for building of stocks relative to demand.  If this doesn’t abate either through greater demand of reduced supplies it’s hard to paint a rosy picture for corn prices.  Time will tell.

Ohio Farmland Undervalued? Not So Fast!