Where Did All the Corn Acres Come From?

The rapid decline in commodity prices has pushed prices toward, if not below, breakeven prices for many producers. Due to forward sales, possible crop insurance indemnities, and government payments, the profitability outlook for this year remains better than bleak for many producers. However, recently released budgets for the 2015 crop look downright ugly. For instance, Purdue’s budgets show a net expected loss ranging from $156 to $317 per acre on average quality soils. Results from Illinois suggest a similar situation.

These low prices are one way that the market is telling us that less corn is needed. To some of us this price downdraft was eye-opening and it certainly got me thinking. First, who is going to plant less corn next year? Second, where did all these corn acres come from in the first place? My memory is usually a bit fuzzy on these facts, but it didn’t seem all that long ago that we were planting somewhere around 82 million acres versus 90+ million acres of corn. So I decided to look at trends in planted acreage and see what has been happening.

The chart below shows U.S. planted corn acreage since 2000. Yes, my memory was a bit fuzzy, we haven’t planted less than 85 million acres since 2006 (8 years is a long time) and recently we have been much higher than this year’s crop (97 million in the 2012 drought year). If one looks back to the early 2000 to 2006 time period, you see that 82 million acres (2005) was indeed a high water mark in that time frame. So how on earth did U.S. farmers add so many acres of corn production? 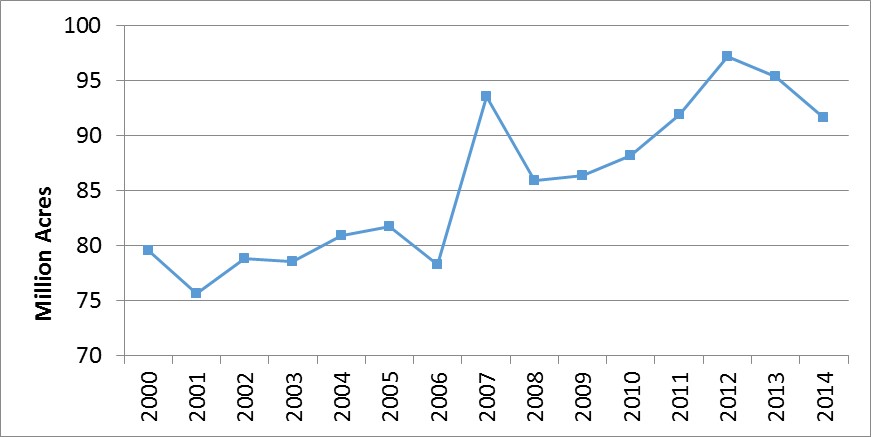 In order to get a better understanding of where the acres of corn production came from, I calculated the average plantings in each state from 2000-2004 and again in 2010-2014. Nationally, the difference between the averages of these two periods is 14.1 million acres. The difference between the two averages for each of the 30 states that planted more than 300,000 acres are shown in Figure 2.

The states are ordered on the graph according to total plantings, with Iowa first and Alabama last. What you quickly observe is that the major producing states added significantly to their corn plantings in this time period. In fact, the top nine planting states (from Iowa to Ohio on the horizontal axis) added 9 million acres of production or 64% of the total additional acreage. North Dakota’s additional 1.6 million acres are also very noticeable. To put the magnitude of North Dakota’s increase in perspective, the bottom 15 state in planted acreage (Colorado to Alabama on the axis) added only slightly more, 1.85 million acres, or 13 percent of the national increase.

Another way to look at the changes is to compare the percentage increases in each state (Figure 3). The U.S. average increase was roughly 18%. Most of the major producing states did not increase acreage at this rate. The exceptions in the top half of the states by plantings were South Dakota, Kansas, Missouri, North Dakota, and Kentucky, all of which increased plantings more than the national average. In the other half of the distribution you can see several states that ramped up plantings more than the national average rate of increase. Notable are several Southern states such as Mississippi, Arkansas, and Oklahoma which increased their plantings significantly in relation to earlier periods.

To answer the question of where the corn acres came from, most (64%) of the acreage increase came from the top 9 planting states and 86% came from the 15 states that planted the most corn. Among this group several large percentage increases were noted in South Dakota, Kansas, Missouri, and particularly North Dakota. Many Southern States also added to their production.

The recent history of high corn prices certainly spurred farmers to plant more corn. Now as the market uses lower prices to signal the need for less corn, it will be interesting to see how farmers adjust their corn plantings in coming years. From an economic standpoint one would argue that farmers in the areas that increased production the most were changing their cropping patterns because prices reached levels that were high enough to meet costs and/or corn prices were attractive relative to alternative cropping practices (corn now produced the largest contribution margin).

As corn prices fall, look for farmers to again carefully examine alternative crops and rotations. I would expect to see changes in the states that showed the largest increases first. On the other hand I’ve heard it said many times, “farmers love to plant corn and they will just keep planting it no matter what”. I’m not sure I would bet on that in the long-run.

Ohio Farmland Undervalued? Not So Fast!

New Paint: A Look at Combine and…