8 Trends Shaping the Future of Agriculture: The Census of Ag Facts Everyone Should Know 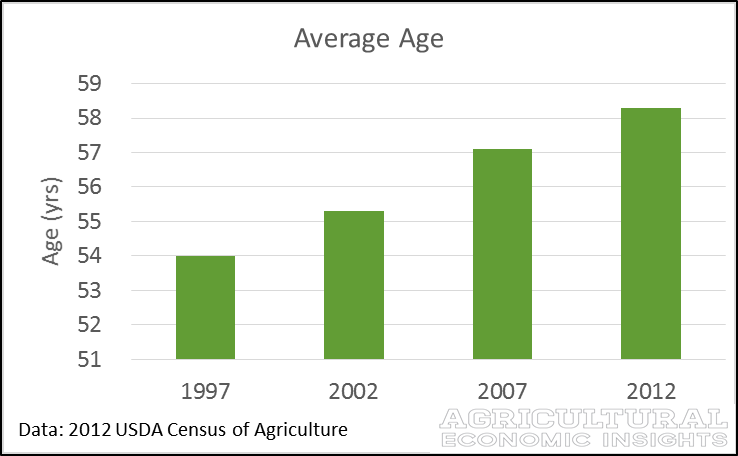 The recent release of the 2012 USDA Census of Agriculture provides a comprehensive picture of the U.S. farm sector.  There are many, many potential insights that can be gleaned from the data, but hundreds of pages of data can be a little overwhelming.

For this post, an overview of the 8 Trends is below:

It may surprise you but, the number of acres of farmland continued a long downward trend in 2012. Over the past five years, the average farmland loss rate in the U.S. was equal to: The rate at which farmland acres declined has slowed. Also, the rate of decrease is extremely small. At a rate of -0.16%, it would take 420 years to reach half of the acres in 2012.  Bottom line, don’t panic about changes in farmland acres.  Contrary to some reports, we still have a tremendous amount of farmland in the U.S. and it isn’t going to go away anytime soon. The latest Census numbers report the average farm size is 434 acres, up from 418 in 2007. Another metric to evaluate farm size, the number of farms with more than 2,000 acres, is also up.  In 2012, 82,207 farms reported more than 2,000 acres, the most observed in the fifteen year period shown above. It is also important to remember just how few of these large producers there are. Only 3.9% of total farms (about 82,000) have more than 2,000 acres. It would probably be safe to assume that most, if they admitted it, would find this number surprisingly small.

While overall number have appeared to stabilize a bit, the trend toward larger farms dominating agricultural production continues.  Bottom line, while most farms are small, most production takes place on larger farms. There has been a rising tide in agriculture, especially since 2002, but the tide hasn’t lifted all ships evenly. The market value of crop production in 2012 increased 48% over 2007 levels (8.1% annualized) whereas livestock only increased 18.7% (3.5% annualized). This trend was influenced heavily by very high grain prices that occurred in 2012.  We would look for this to trend downward a bit in the next census or even if it were conducted this year.  Still, it is clear that the value of production would be substantially higher than it was even 10 years ago.  This higher value of production has fed through much of the agricultural sector and impacted everyone from farmers, to retail ag suppliers, to ag input manufacturers.

#6) Farm Expenses went up even Faster.

In 2012, farm expenses were 36.4% higher than 2007, a 6.4% annualized growth rate. Yes, faster than the increase to the value of production. In 2012, expenses represented a higher share of each dollar of revenue than in 2007.  Whether this trend is sustainable will go a long way in determining how the various players in the ag economy fare going forward. In 2012, the average value of a farm’s land & buildings and machinery & equipment was nearly $1.2 million. Across all farms, assets were worth about $2.5 trillion.  There is no denying that the last 10 years have been very good when measured by the level of wealth in the farm sector. It remains to be seen how farmers will respond to the much higher levels of wealth in the sector. The vast majority of this increase came from the rapid appreciation of agricultural real estate, but it is clear that machinery and equipment values are much higher now as well.

#8) Farmers are still getting older Probably one of the most widely reported stats from the Census will be the average age of a farmer (reported as the age of principle operator): 58.3 years; up 1.2 years from 2007. A deeper dig shows that the number of producers older than 64 is on the rise. In fact, 85.7% of that increase (farms with primary operators older than 64) came from operations with multiple operators. This would suggest that, potentially, multiple generation farms are becoming more common and allowing the primary operators to stay in the game longer.  Combined with the massive gains in wealth shown in the previous figure, it points to the need for many families to consider how to transfer assets to the next generation of farmers.

Lower Farmland Values Ahead? What Would USDA…