Thanksgiving 2014: A time for family, friends, and the great American shopping debate of 2014 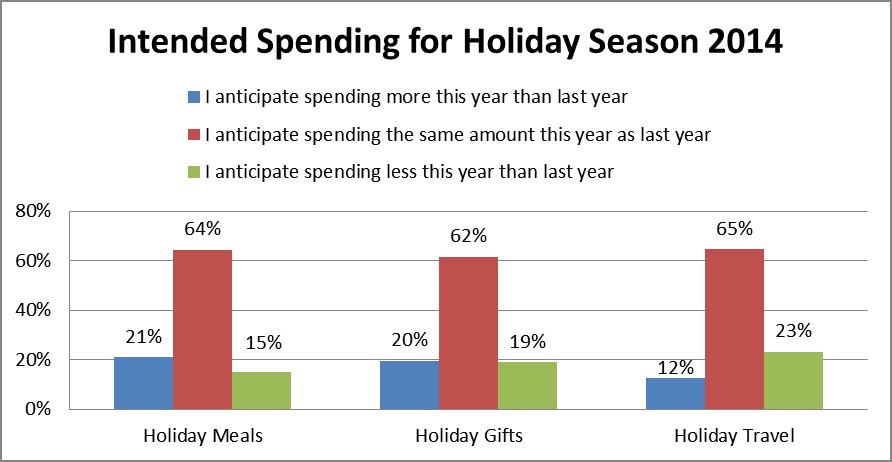 In the spirit of Thanksgiving, we are sharing this exclusive guest-post. This work takes a look at some of the hottest issues of the season and includes survey data collected in just the last few days! We hope you’ll enjoy the post and share it with friends and family. Happy Thanksgiving!

Thanksgiving is an undoubtedly agriculturally-oriented holiday; in fact, the main event is an oversized meal, followed by dessert, and often preceded by appetizers and snacks.  Where does your attention turn as soon as the meal is over and your dinner companions are all in a post-turkey haze?  Turkeys, and travel, and shopping, oh my …

Holiday season 2014, and in particular, the holiday shopping season of 2014 has been hotly debated in the media.  Which shoppers are looking for deals – and when?  We conducted research in the Department of Agricultural Economics at Purdue University and surveyed 620 US residents the week before Thanksgiving to gather insight into plans for this holiday season, including travel, intended spending, and meal planning.  Surveys were completed November 17th-19th 2014 and preliminary data analysis has been completed to provide insight into the upcoming Thanksgiving holiday and US consumer behavior.  Who are these people, you may be asking; basic survey respondent demographics are available by clicking here.

Thanksgiving is Just Around the Corner …

Given intended spending on holiday travel showed the most signs of potential decline from last year of the three categories investigated – just how many respondents are planning to travel?  A total of 91% of survey respondents intend to celebrate Thanksgiving with a holiday meal this year and 22% of those people plan to travel for the holiday.  While Thanksgiving has become an increasingly popular vacation time because of the planned time away from the office (my husband and I took our Honeymoon over Thanksgiving for just this reason!) only 10% of those traveling this year are going on vacation.  Nearly 90% are traveling to visit family and friends, just as you might have guessed.

And speaking of that Thanksgiving dinner, about 75% of those celebrating will do so with turkey in 2014.  Hams will be the main focus of 8% of Thanksgiving tables, with other meats and meat substitutes constituting the remaining 16%.

It is NOT about shopping at the crack of dawn anymore …

In fact for 46% of respondents, it isn’t about shopping at all; 46% of individuals indicated they will not shop at all from Thanksgiving day through Cyber Monday.  A total of 796 intended shopping trips were reported by the 336 respondents planning to shop Thanksgiving weekend (each responded could select up to 6 intended shopping trips, as indicated on the figure below).  A total of 28% of the responses received were for shopping on Cyber Monday, 21% for during the day on Black Friday and only 18% for Black Friday morning.  So, less than one in five responses was for that magical 4 a.m. experience that will undoubtedly land at least a few unsuspecting stores on the news for one reason or another.

Wow, that’s a lot of shopping! Aside from shopping the holiday season also has a lot of food, desserts, and drinks. 42% of survey-takers agreed they would consume more desserts during this period than at other times of the year. On the other end of the spectrum, 54% disagreed they would be consuming more alcohol.

We leave you with one final statistic we found particularly interesting … 42% of respondents agreed that they would consume more desserts but only 29% indicated they expected to gain weight this holiday season.  Perhaps many of us are counting on a little holiday magic this season?

Dr. Nicole Olynk Widmar is an Associate Professor in the Department of Agricultural Economics at Purdue University.  Nicole is a farm management specialist with a research interest in linking consumer preferences for food products back to on-farm decision making.  She holds an AAS from Alfred State College, a BS from Cornell University, and a MS and PhD from Michigan State University.

Grain Pains on the Plains; A Look…