Farmland Values: Are They Really Falling? 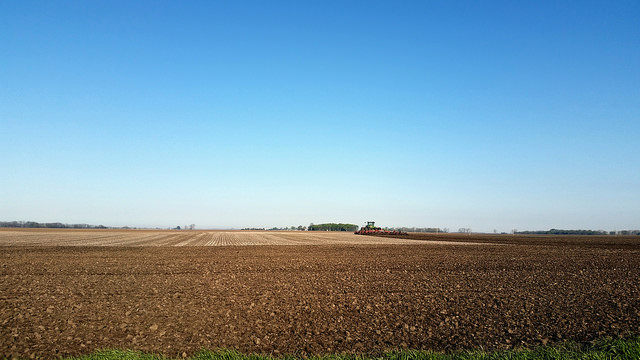 In our 2014 year in review we noted that 2014 might go down as the year that farmland values and rents stopped shooting higher. At that time the reports on farmland values were a bit mixed with the majority showing a slight softening in the market. Today, crop prices have continued to drift lower.  We thought it would be a good idea to attempt to summarize some of the land market data from around the country.  In doing so it appears clear that land values are softening throughout much of the Midwest.  The obvious questions that everyone are asking is how much have they fallen and how much further might they fall?

What are the Reports Saying?

A wide variety of land value surveys are conducted around the country. Many of these surveys rely on the opinions of realtors, lenders, and other market participants. Such surveys are sometimes criticized as not being representative or overly dependent upon the land market participants included in the samples. On the other hand, these respondents tend to be well aware of current conditions and can be regularly surveyed about current conditions.

In contrast, the USDA uses a very sophisticated area based sampling procedure in the June Area Survey of farmers to derive their estimates of cash rents and land values. This approach is sometimes criticized because the farmer respondents may not be active in the real estate market and therefore not aware of the latest price movements.

More recently, efforts by Mykel Taylor at Kansas State and other private forecasters have utilized public records of real estate transactions to assess farmland market conditions. These approaches have the advantage of using actual land transaction records. However, this approach is difficult to consistently implement and individual transactions sometimes have characteristics that are hard to measure and account for in developing an estimate of farmland values.

Not surprisingly all of the results from these surveys provide slightly different takes on the farmland market. In our opinion, each type of survey has its strengths and weaknesses. We think it is probably best to stay aware of all of them in order to get a sense of how the market is reacting. At present it appears that farmland values are softening in most locations throughout the U.S. Table 1 summarizes some of the recent results that have been collected by various organizations.

The most recent entries in the table, those from the Iowa Realtors Land Institute and the preliminary results from the University of Nebraska both indicate lower land values. The Iowa State survey showed an 8.6% decline statewide in 2014. This is only the second decline reported since 2000 and the largest since the farm financial crisis period. So it appears that Iowa land values have already begun to soften significantly.

When one examines the data reported by the various Federal Reserve banks, the regional variation in farmland markets becomes apparent. While most districts were reporting values falling from 13% (St. Louis dryland) to modest increases (1% Kansas City), both San Francisco and Dallas reported much stronger markets. Purdue, Kansas State, and North Dakota State reported increases. In the case of Purdue the survey noted that although prices increased year over year, respondents expected a decline from June to the end of 2014.

The USDA also conducts their survey in June and its results show that respondents in most regions felt land values were higher as opposed to 2013, with only the Mountain State region showing a decline. The Great Plains, both Northern and Southern showed the greatest increases. The magnitudes of the increases in some regions are somewhat hard to explain, but the timing of the survey very likely plays a factor.

On balance, when we look at the bulk of the data and the timing of the various surveys, it seems to suggest pretty strongly that the farmland market has turned lower in much of the U.S. There has been great consternation in many circles over whether the farmland market is or has been in a bubble. Based on this data it appears the answer is no.

In a bubble environment we would expect to see farmland prices moving with little regard to economic fundamentals (earnings and interest rates). The farmland market is currently adjusting as commodity prices fall and the longer term outlook on commodity prices becomes less bullish. How much adjustment has to take place depends on how much less bullish the longer term outlook becomes.

In terms of commodity prices and farm earnings, the picture suggests that most farmers will suffer substantial losses at current prices. This appears to already be putting pressure on farmland values and rents. If the situation persists or becomes worse the pressure will become greater as we argued in this post. Low interest rates have been the other big driver of high farmland prices. While there are indications that the Federal Reserve will increase short term rates in 2015, longer-term rates remain low and should help buffer the declines in commodity prices.

Over the years I have heard many arguments about why farmland prices won’t fall. However, I think we all know that asset prices go up AND down as expectations about the future change. In many parts of the Corn Belt it appears that farmland was priced at something near a 3% to 4% capitalization rate and under the expectation that corn prices would be at least $4.50 per bushel. It appears that the expectations about earnings are beginning to adjust downward and farmland prices will likely follow. If all the survey results aren’t showing that today, they likely will in the future. In a future post we will take a look at some economic models that lead me to that conclusion and some scenarios to examine how much further farmland prices might decline.