2016 USDA Cost of Production Forecasts Point To More of the Same for U.S. Farmers 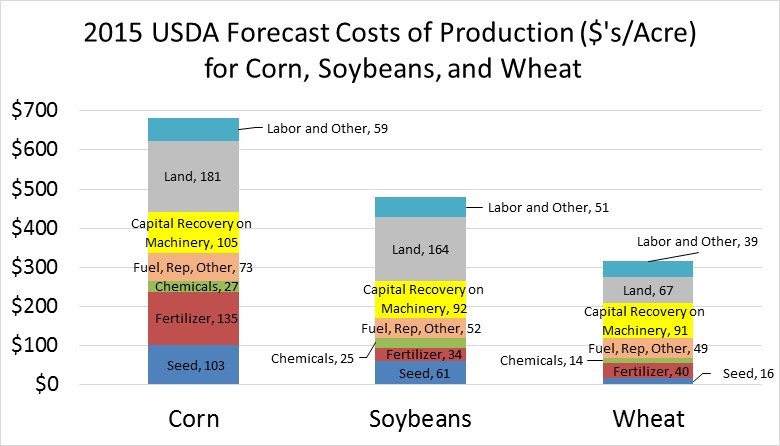 NOTE: An updated look at costs of production – and the 2017 USDA data- is available here.

The USDA’s Economic Research Service recently released 2016 crop cost of production estimates. We thought it would be useful to take a look at the budgets and see how ERS thought things might change for the next crop year. Then we looked at the budgets and realized there wasn’t much to say if we were going to focus on differences from 2015. The 2016 cost of production estimates for corn, soybeans, and wheat show costs nearly the same as those forecast for 2015. To be specific the budgeted costs range from $8.48 (corn) to $5.00 per acre (wheat) higher than 2015.

Given that the forecast was for similar levels as 2015, we thought it would be useful to highlight how the budget categories differ across corn, soybeans, and wheat. The components of the budget for these crops are shown in Figure 1. This figure illustrates the different combinations of inputs that are required for the various crops on a per acre basis. For each crop (bar) inputs are arranged with costs usually thought of as variable costs at the bottom and progressing upward to fixed costs.

There are a couple of important points that can be made about the cost structure associated with these crops. First, the variable costs associated with corn are much higher than for soybeans and wheat. The greatest difference is in the amount of fertilizer that is required to grow corn. In these estimates, fertilizer costs are nearly $100 per acre greater for corn than soybeans. Seed costs are also much lower for soybeans and wheat than corn. These two categories, seed and fertilizer, comprise 70% of the variable costs of corn production and 55% and 46% of the variable costs of soybean and wheat production.

One reason for the relative difference is that overhead costs are similar, but not the same across the crops. Land costs are estimated higher for corn than either soybeans or wheat. Readers may be wondering why land costs would differ for corn, soybeans, or wheat as all of these crops could be grown in many locations. For example, if one were to grow wheat on high quality farmland in the Central Cornbelt, the land charge would not magically shrink from $181 to $67 per acre. Instead the full land charge would be absorbed no matter what crop is grown. This same argument could be made for all of the other fixed costs.

This non-intuitive aspect of the cost of production forecasts is partly a result of making an estimate at the national rather than regional or even farm level. For instance, on all the land that corn is typically grown on in the U.S. the estimate of the land charge is $181 per acre. This means that land capable of growing high input corn tends to be more valuable than that which grows the less intensive wheat crop.

The 2016 budgets are broken down further in Table 1. Here, we used 2016 trend yields for corn, soybeans, and wheat from this excellent farmdocDAILY series on estimating trend yields (there is an article for each of the crops). This allows one to calculate a total cost of production on a per bushel basis. For instance, at the estimated trend yield of 166 bushels per acre for corn the costs of production would be $4.11 per bushel. Using this approach soybeans and wheat come in at costs of $10.65 and $6.50 per bushel respectively.

The next line in the table is an estimate of the market year average (MYA) price based on futures markets and historical basis levels. These values can and will almost certainly experience many changes between now and 2016. However, it is clear that today’s estimates of 2016 prices for these three crops are well below USDA’s estimates of the average cost of production.

Given that output prices are below the total cost of production, many farmers will be producing in order to make a contribution toward covering their fixed costs. This concept is reflected in the contribution margins shown in the next two rows of the table. The values show that the contribution margin is positive for these three crops. On a per acre basis, corn has the highest contribution margin and wheat the smallest. This is one reason why there is little wheat grown in areas that can produce corn and soybeans with yields approaching the trend yields at the top of the table. At these yield and cost combinations, wheat does not make as large of a contribution toward fixed costs, which tend to be higher in those areas.

The final lines in the table show the estimated profit and loss for the various commodities. As one can see they are all negative. At these cost and return levels it appears that corn is slightly less unprofitable than soybeans (I guess that is a complement). This means that for areas with similar cost and return profiles to those shown in Table 1, corn will be attractive relative to soybeans even though total profit potential looks relatively grim. If so, this will likely have the effect of keeping some of the variable costs such as fertilizer firm in 2016.

The USDA cost of production estimates suggest that 2016 input costs will be similar to 2015. With prices at current levels, this would mean another challenging year for many farmers. When looking at these budgets it is important to remember that they are estimates for the entire U.S. Each region and farm will face different costs and returns depending on their own specific situation. This means that the estimates should be interpreted with some caution. However, one thing we can definitely take away from this exercise is that ERS is not forecasting input prices to come down dramatically in 2016.

In our own AEI crop budgets we examine profitability by region and crop.  Our budgets suggest that the total costs of production will be higher than those estimated by ERS for producers in many regions. This is true even though we expect some cost categories to decline for 2016. Regardless, we believe that 2016 will likely be another year where cost control will take center stage in the decision making process. It will also likely continue to put downward pressure on fixed asset values including land and equipment values.

Many things will change before 2016 arrives.  This will include changes in commodity and crop input prices.  Some of these may improve the profit outlook and others may cause it to deteriorate further.  While the farming sector appears to be in relatively good financial shape, there is a continuing need to reduce costs in order to restore profitability. In our view, this need will probably not go away anytime soon.

Has a Cost of Production Advantage for…