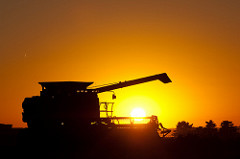 At the end of October the USDA provided a Halloween treat by making ARC-CO payments for several 2014 crops. In fact, USDA reported that 800,000 farms received ARC-CO payments.  The 2014 ARC-CO payments totaled $3.9 billion with the vast majority ($3.3 billion) paid on corn base. This wasn’t surprising as the ARC-CO program was very popular with corn and soybean farmers, with over 90% of farms and base acres enrolled in the program.

As we discussed in an earlier post, government support has played a key role in moderating the impact of farm income downturns. However, the payments provided under this farm bill will almost certainly be less than that in previous periods of low income. Further, given the structure of the ARC-CO program it is quite likely that program payments for corn will begin to fall after the 2015 payments.

ARC-CO payments are dependent upon county crop yields, market year average (MYA)  prices, and their 5 year Olympic averages. Since we now have the previous five years of price and yield data we can calculate the Olympic average prices and yields for the 2015 program. The Olympic average is calculated by removing the high and low values from the calculation of the average. This means that the averages are based on 3 values.

But Corn and Soybeans Likely to Decline in 2016

Corn and soybeans the 2016 average will fall unless the 2015 MYA prices are $5.18 and $11.30 respectively. Market year average prices at this level seem quite unlikely at this point. For instance the high values of the current WASDE forecast are $3.95 for corn and $9.65 for soybeans.  In other words the price guarantee for corn and soybeans will probably begin to fall with the 2016 crop year (payments that will be received in 2017).

Wheat is in a little bit better position.  The 2016 average will not fall and could increase if the 2015 MYA price comes in above the previous low value used in the calculation of $5.99. The current high end of the WASDE forecast is $5.20, so increasing prices may not occur but at least the guarantee won’t fall in 2016.  The last row of the table shows what the 2016 price guarantee would be if prices were to fall at or below the reference price for each commodity.

Government program payments will provide some support to farm incomes during the ongoing farm economic downturn. Given current price levels and the price guarantees associated with the ARC-CO program, many farms will likely receive payments for the 2015 crop. However, these payments will depend upon the actual yields achieved in a particular county, something that won’t be estimated for some time.

While it appears that payments for 2015 will likely meet or exceed those in 2014, the Olympic average calculations for the ARC-CO program will result in lower price guarantees for corn and soybeans in 2016. In order to avoid price guarantee declines, prices would have to increase substantially from their current levels. This would also reduce the likelihood of 2015 program payments. In other words, it is almost certain that the total payments made under the program will begin to decline for corn and soybean producers starting in 2016. If the current price outlook does not change it will be imperative for farmers to wisely manage their financial situation. As we pointed out earlier, it is unlikely that government program payments will provide the level of support that they have in previous economic downturns.

How Did Your County Do? Changes in…