The 12 Questions Production Agriculture Will Face in 2016 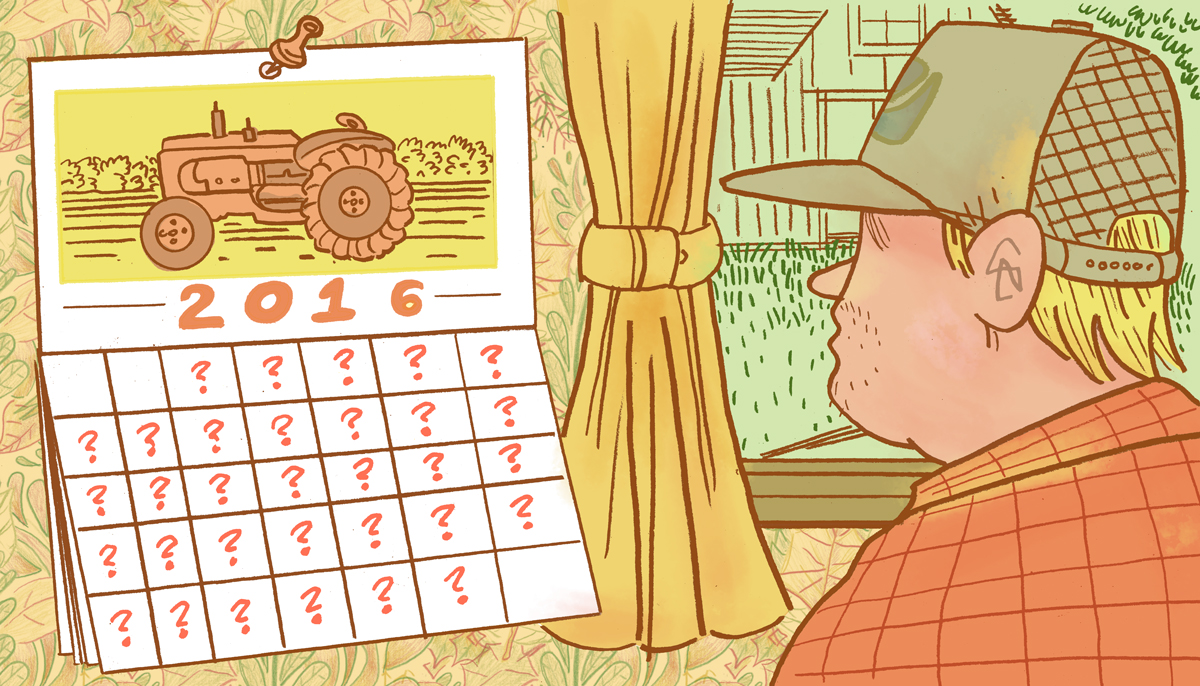 Coming off two years of very large declines in farm incomes, will 2016 be the year the situation stabilizes? If not, will the strong financial condition of the sector hold?  What will happen with land values?  What wildcards are in the deck?  Given the last two years, the stakes are perhaps as high as they have been in a while.  As we head into the new year we put together a list of questions production agricultural will face in 2016 and some thoughts on the topics that we will be thinking about.

1. Will farm profitably fall for a third year?

As the books closed on 2015, U.S. net farm incomes had experienced its second year of sharp decline. The rate at which net farm income has fallen, more than 50% from 2013, has conjured up unsettling memories of the farm financial crisis of the 1970s/1980s.

A few months ago things were starting to look a bit better.  With fertilizer and fuel prices falling, there were hopes that profitability in the row crop sector might stabilize.  Then grain prices took another tumble and erased most of the potential gains on the cost side of the ledger.  With the livestock sector now reeling from price declines and poor margins we can’t help but think that another year of net farm income declines is likely headed our way.  However, the year is young, and for the grain sector much of the answer will likely depend on whether another exceptional growing year materializes.  If so, things will be tough.

For producers, the easiest adjustment would be for higher commodity prices. So far this hasn’t happened.  Adjustments are beginning to come with lower fertilizer prices and farmland values.  While these represent very large cost categories, the downward adjustments are not yet enough to restore profitability.  Further, while land rents might be characterized as soft, they are clearly not dropping rapidly.  On the equipment side spending on equipment has fallen, with used equipment prices under serious pressure.  At the end of the day we think that there will eventually have to be bigger declines in both variable and fixed costs to restore profitability.  A little help from higher commodity prices wouldn’t hurt either.

While cropland price and cash rents softened in 2015, the changes have been rather slow. In the Corn Belt cropland values were 2.5% lower overall, but varied from 3.5% higher in Ohio to 6.3% lower in Iowa. So while cropland values have, overall, been slow to adjust, the magnitude of adjustments have varied.

While we believe current fundamentals certainly do not support higher farmland prices in 2016, the question is whether farmland values continue to slowly adjust downward or is farmland in for a bumpy ride?  If current profitability levels persist we look for farmland to soften even further.  The earnings are just not there to support lofty farmland valuations.

4. Will the strong farm financial conditions hold for another year?

5. How many acres of corn and soybeans will the U.S. (and World) plant?

After another large U.S. harvest in 2015, the 2016 acre conversation will focus on “too many” acres rather than “not enough.” Remember the days when some groups tried to argue that we couldn’t do both biofuel and food?  Now we hear people consistently saying that the profitability of corn and soybeans are low, but what else is there to grow?  Right now, the answer is not much.  Profitability doesn’t look good for many crops right now.

With the AEI Crop Budgets we have recently observed a switch away from corn having an economic edge to soybeans having a slight advantage in 2016. Keep in mind neither crop is economically profitable, but current prices have supported a slight advantage for planting soybeans in 2016. As the crop insurance price discovery period approaches we will be keeping a close eye on prices and planting expectations.

El Nino is in strong force and has kept things mild and soggy across the Midwest this winter. While summer El Nino conditions were at times challenging for producers, the overall conditions were favorable for large corn and soybean crops. El Nino leave two lingering questions for 2016: how long will it last and what follows?

The Climate Prediction Center’s current forecast is for El Nino conditions to remain through the Winter months and begin to transition to a neutral pattern in the late Spring and early Summer months.

Our take: the current forecasts leaves the door open for El Nino to potentially create soggy conditions in the Spring and also allows for plenty of rumors speculating about drought-prone La Nina conditions appearing on the heels of El Nino. As always weather will get lots of attention during the growing season, but this year it may get even more than normal.

7. Will the livestock sector make it thought the year without a major disease outbreak?

It seems like there have been several major livestock health situations as of late.  In 2014 it was PEDv in hogs. In 2015 it was Avian Flu for chickens and turkeys. Will the agricultural markets face another disease outbreak in 2016?

8. Which agribusinesses will consolidate?

The profitability declines in the sector have started to have their repercussions in the agribusiness sector.  As 2015 came to an end, news that Dow and Dupont would merge was announced. This came after months of speculation and rumors of mergers and acquisitions within agriculture. We feel additional consolidation is likely in 2016.  While most of the M&A talk has focused on the input sector, don’t rule out consolidation within the grain purchasing and processing segments.

The Fed Reserve raised interest rates late in 2015. While the rate change has so far been small and with minimal impacts, it opens the door on a broader question about the health of the U.S. economy and whether interest rates might continue higher.

Producers will likely see higher rates in 2016. Some of this will be from the Fed’s decision. In many cases, however, the higher rates will be a result of changes in credit risk.

However, one of the biggest issues related to interest rates is where longer-term rates head.  Will they remain low or will they start to work up too?  This will bear close attention as the impact of increases in longer-term rates would be felt on farmland prices already under pressure from lower incomes.

10. Will the U.S. Dollar continue higher?

A strong, or expensive, dollar can makes US exports expensive for international buyers to purchase. This has made agricultural trade difficult recently and will be critical to monitor into 2016.

The new year is only two weeks old and China has been dominating the financial market headlines in 2016.  Concerns about the economy have sent Chinese stocks, and stocks all around the world, lower.

China is a large consumer and global buyer of several agricultural products. A slowdown in China’s economy is a slowdown in the global demand for agriculture products and many other commodities. How much will be the ultimate question and something that will need to be monitored closely.  As we pointed out last year, for some commodities, China is key.

What to say here without creating a long list that will keep everyone awake at night? Suffice it to say that there is a lot of global uncertainty. For the most part, these have all been small-issues without large ripple-affects.

In November, Roger Cohen wrote an opinion piece in the New York Times and reminded us that “sometimes little things get bigger, there’s a spark and it’s a big mess.” There are lot of little things happening in the World right now.

Well we got through that list and we didn’t even mention oil prices heading to levels last seen (only briefly) in 2008 and the early 2000’s before that. Without doubt 2016 will be an eventful year. What is on your watch list for 2016? Share below.

Illustration by Will DInski/Agricultural Economic Insights (2016).

9 Tips for Securing Your Farm's Financial…