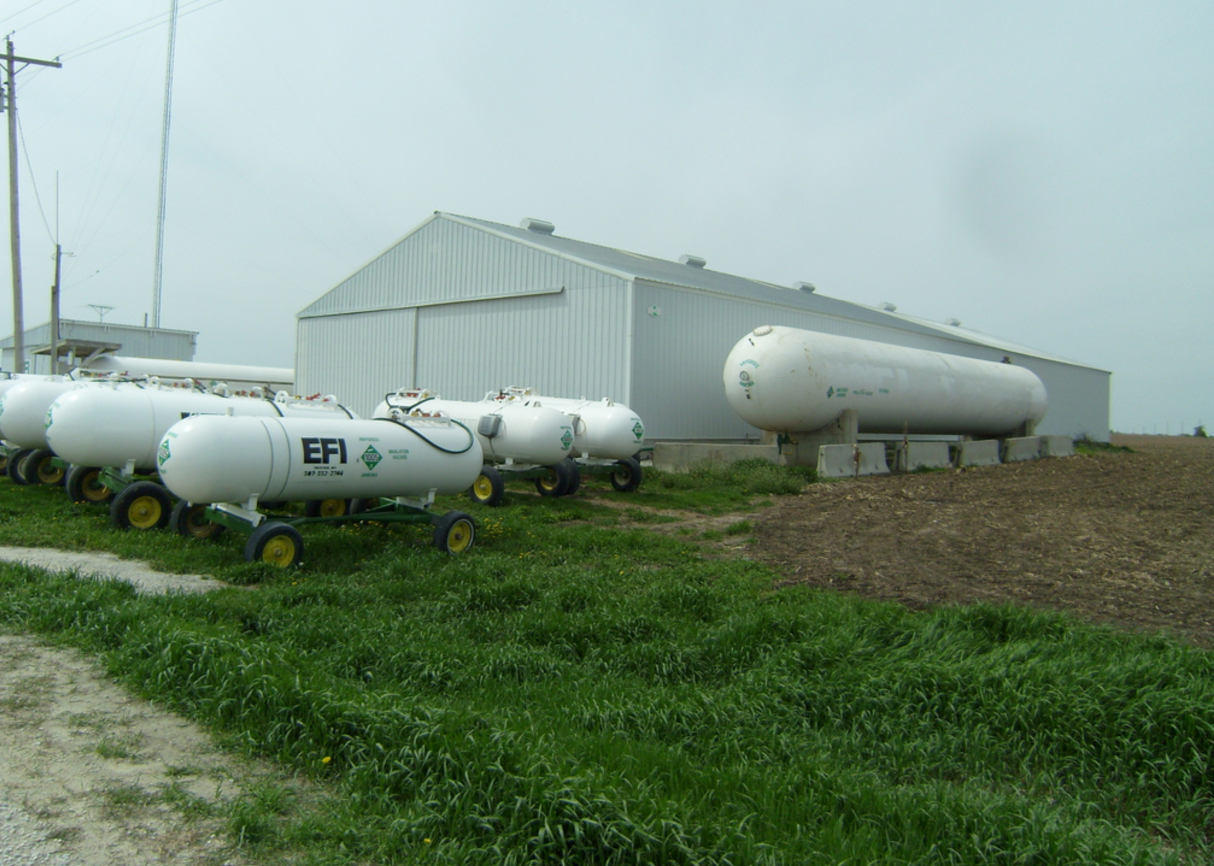 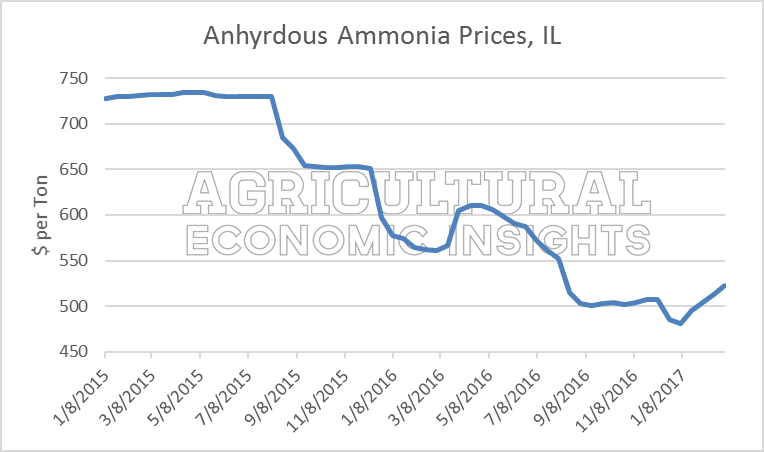 The uptick in prices has been most significant with urea, shown in figure 2. Urea prices spent most of Fall 2016 above $300 per ton, but current prices have turned higher to $361 per ton, or 19% higher. 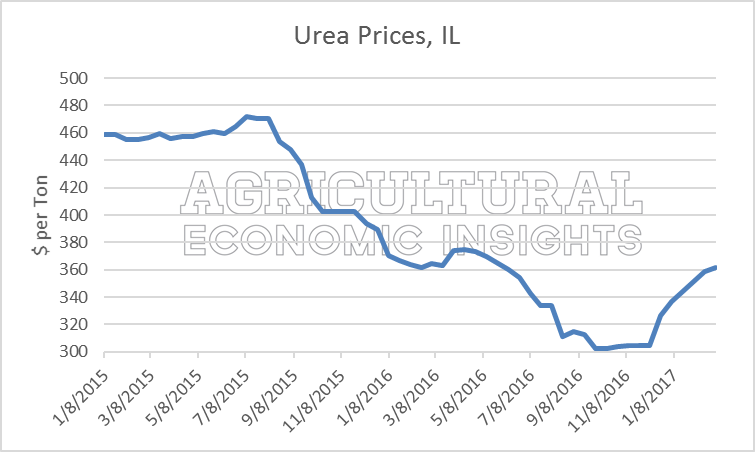 It is worth noting that an uptick in prices occurred in Spring 2016 as well. From March 2016 to early April 2016, anhydrous ammonia prices – as an example – jumped nearly $50 per ton (or 9%). This is to say that price upticks are not uncommon, especially prior to planting.

The price upturn extends to phosphorus and potassium fertilizers as well. In figure 3, prices for anhydrous ammonia, DAP, and potash are shown since 2010. The prices of DAP has increased nearly 3% since January lows while Potash has climbed 12% since August 2016. In all cases, current fertilizer prices are below early 2016 levels, and well below the highs reached between 2011 and 2013. 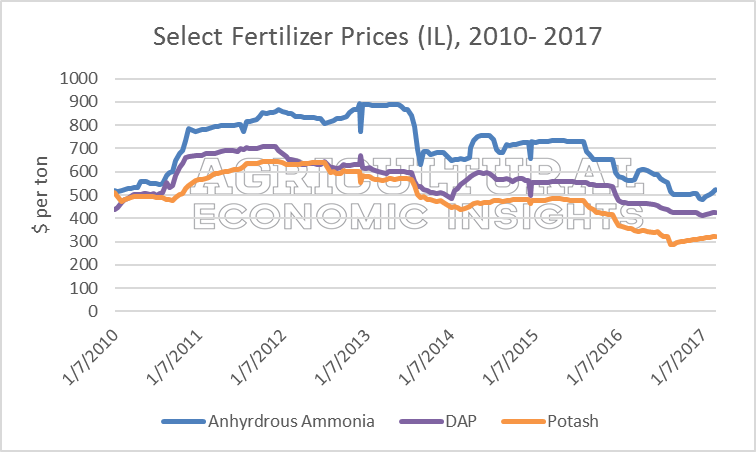 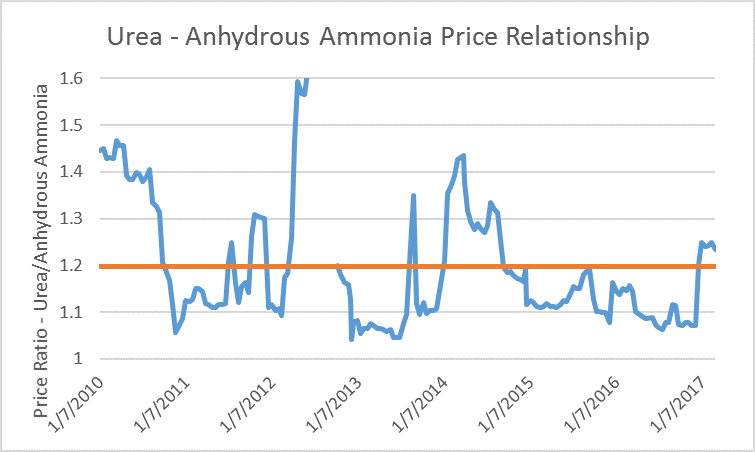 Even though fertilizer prices have turned higher in recent weeks, prices are still below 2016 levels. This is best illustrated by considering the expense for a 180-70-70 nutrient blend (anhydrous ammonia, DAP, and potash) (Figure 5). The expense of this fertilizer rate is shown using Spring prices from 2010 to 2016 and March 2017 prices. The current fertilizer expense for this rate is $100 per acre, $12 lower than in 2016 and the lowest in of last 8 years. Lower fertilizer prices have driven fertilizer expense considerably lower in recent years. In 2013, the same nutrient application would have cost $163 per acre. Assuming a 180 bushel per yield, the $63 per acre decline in fertilizer expense since 2013 is a $0.35 per bushel decline in production costs. 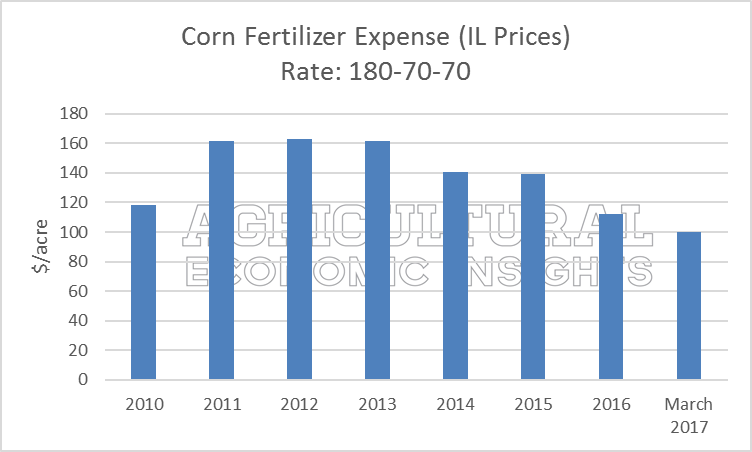 Fertilizer prices in recent weeks have turned higher. The up-turn in prices has not been uniform across nutrients (DAP higher 3% while Potash up 12%) or across products of the same nutrient (anhydrous ammonia up 8% while urea up 19%).

Even though fertilizer prices have turned higher in recent weeks, producers can still expect lower prices and fertilizer expense in 2017 than in recent years.

Finally, producers could further reduce fertilizer expense by adjusting application rates. This is something we previously discussed and a management strategy that 46% of producers indicated they were considered (according to an October 2016 Purdue Survey of producers).