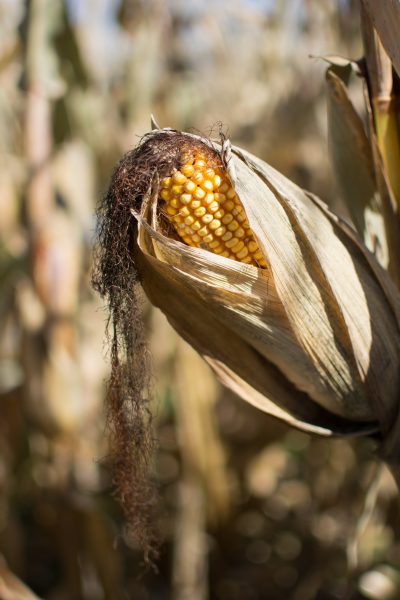 After several consecutive years of strong corn and soybean yields, many will wonder and speculate about above-trend yields again in 2018. A few months ago we summarized the run of strong national yields. Good yields are tricky because while they are helpful at the farm-level in weathering the farm economy slowdown, they are a major source of low commodity prices and net farm income challenges at a national level.

This week’s posts considers local yields for corn and soybeans why some producers could be facing disappointing yields in the future.

Similar to the earlier post, reported yield data – county and state-level for this post- were used from 1960 to 2017. These data were trend-adjusted to account for the upward trends in corn and soybean yields. The average trend-adjusted yields for recent years- 2015 to 2017- were compared to the long-run trend average yields (1960 to 2017) for the respective state or county. In other words, the difference between recent averages and the long-run average is being considered. Using this methodology allows for meaningful comparison of recent yields to long-run yield expectations.

Figure 1 shows how recent state-level yields have compared to the long-run expected average. Parts of the Western Corn Belt have had the strongest yields. Over the last three years, South Dakota corn yields have averaged 10% above the long-run trend, or 15 bushels per acre above. Iowa has experienced yields over the last 3 years 9% above trend, or 17 bushels above.

Yields have been less impressive in the Eastern Corn Belt where Indiana, Ohio, and Michigan were only 1%, 0%, and 4% above-trend, respectively.

Outside of the Corn Belt, yields have been below trend in the Southern Plains, but very strong in parts of the Southeast.

Regions with yields below trend – or only slightly above-trend- in recent years have faced the toughest financial conditions given low commodity price environment. On the other hand, areas with yields well-above trend have fared better as the extra bushels have helped to offset some of the impacts of lower commodity prices.

Figure 2 shows these data at the county-level. Just as the national-trend vary across states, yield data also vary within a state. 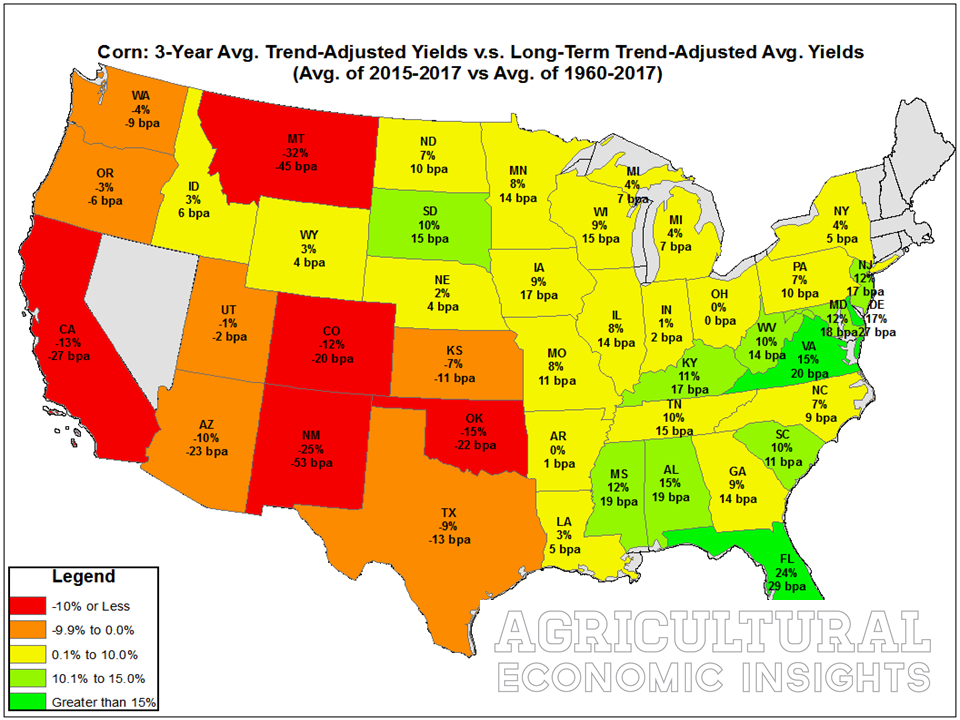 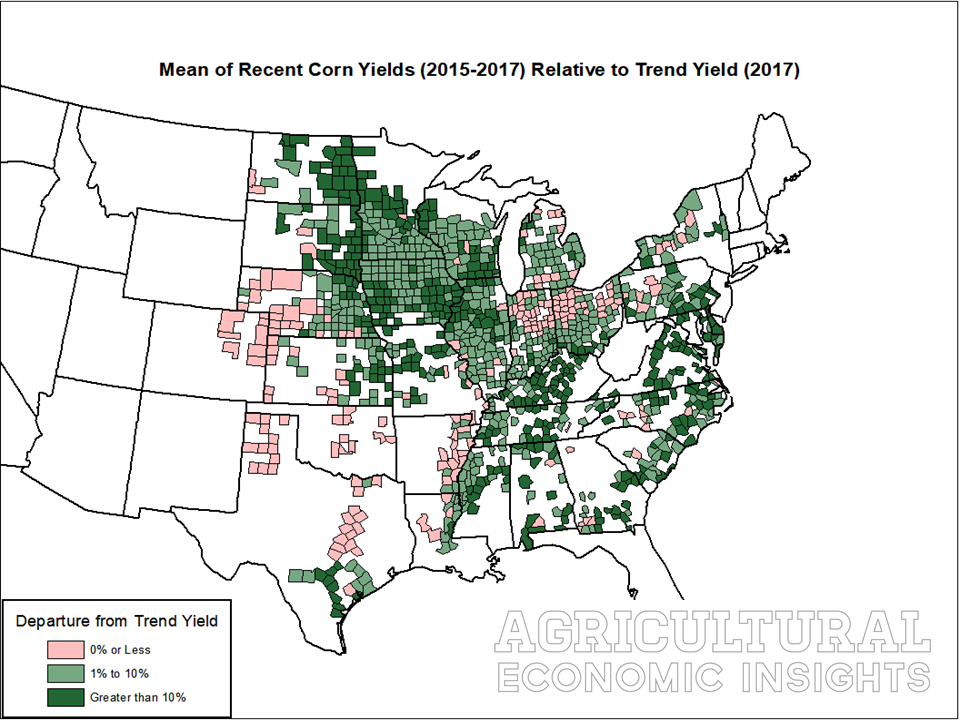 Figure 3 shows recent state-level soybean yields compared to the long-run average, and figure 4 shows the county-level data. Consistent with the earlier post on national yields, recent soybean yields have been very strong in some states and regions. Many states have – over the last three years- averaged soybean yields more than 10% above the long-run trend. Very few states have experienced below-trend yields.

Similar to corn, yields in the Eastern Corn Belt have not been as strong – only a few bushels above the long-run expectations. 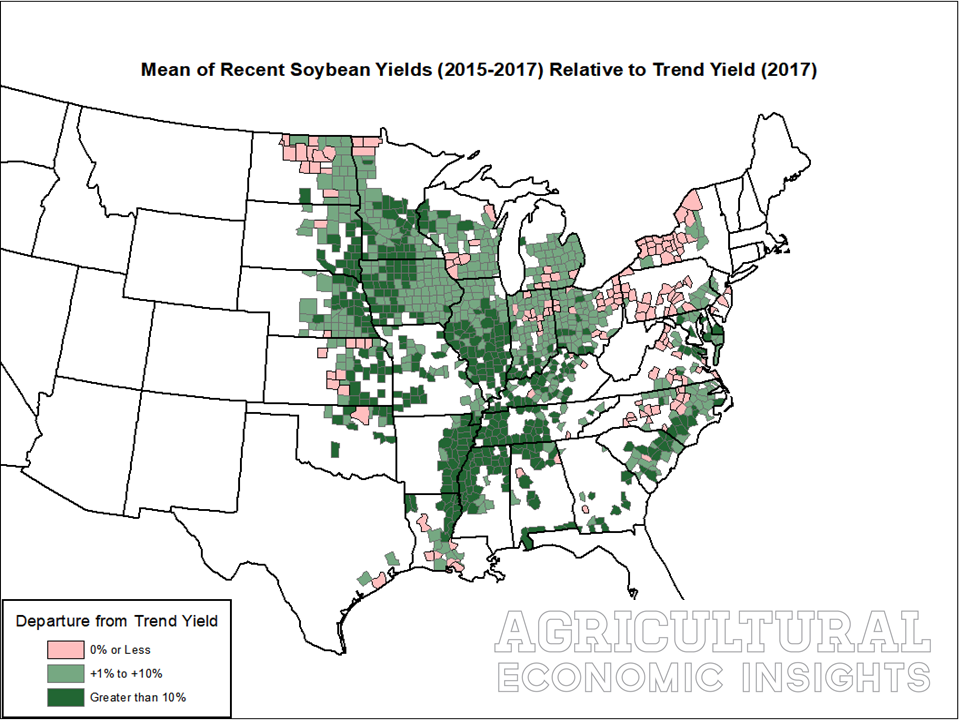 While the run of strong yields has been exciting for many farmers at the field-level (and frustrating at the national level), it’s worth considering the implications of several years of really good yields. Recent yields have likely impacted producers’ expectations when planning or budgeting.

In Table 1 and 2 shows the 2018 trend state-average yields for corn and soybeans in Illinois, Indiana, and Iowa. Also included in the table are the average of the reported yields over the last 3 years, a measure of state-level actual production history (APH).

While producers may use different methods estimating yields while budgeting and planning, it’s important to recognize that recent yields – especially in Illinois and Iowa- are well above what could be considered a long-run average. In 2018, this gap could be more than 10 bushels per acre in corn.

For soybeans (figure 2), the relative difference (percentage difference) is large in Illinois and Indiana. Soybean yields over the last three years are 10% above what we’d expected for a trend average in 2018.

The purpose of these tables is to point out producers across the US. – and especially in Illinois and Iowa- could have yields in-line with historic averages yet fall well below recent yields. This is a set-up for disappointing yields being possible.

The story in corn and soybean production in recent years has been big yields. At the national level, this has weighed on prices. At the state or regional level, the impacts of lower commodity prices depend on how local yields have fared. Areas with yields below trends – such the Southern Plains – have faced the double-whammy of low prices and low yields. Other areas have offset the lower prices with yields well-above long-run expectations.

Looking to 2018, strong yields in recent yields could result in yields feeling disappointing. In some cases, long-run trend average yields could be much lower than what producer could be expecting.

Planting Intentions and the Farm Economy: Some…