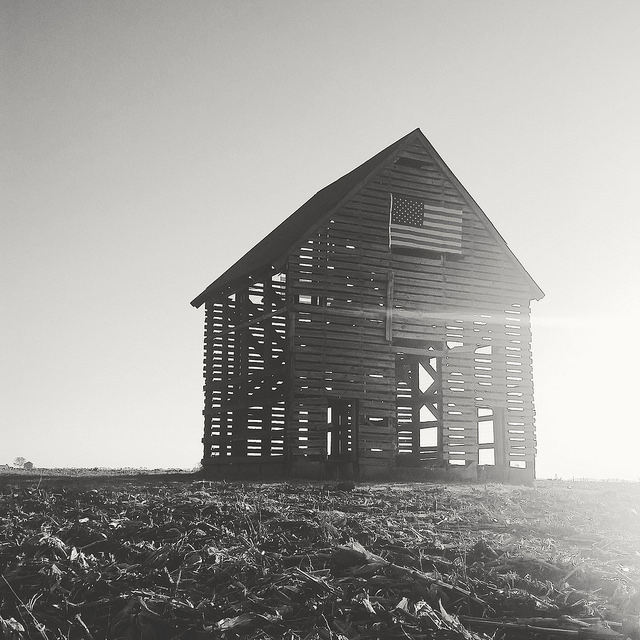 Last week we noted the USDA’s Trade Aid lacked substance and details about how funding would impact farmers’ bottom-line. While farm-level details are still needed, the USDA did provide insight into the Trade War’s impact on the overall farm economy. This week’s post considers the Trade War impact and how the US Farm Economy nearly reached crisis levels.

The USDA’s press release revealed plans to authorized up to $12 billion in programs to offset Trade War impacts. More specifically, the USDA aid was “…in line with the estimated $11 billion impacts of the unjustified retaliatory tariffs on U.S. agricultural goods.”

Earlier this year, we summarized the USDA’s February estimate of $59.5 billion in net farm income for 2018. For several reasons that estimate was concerning.  First, it was lower than 2016 and 2017, which were not good farm income years.  Second, it was less than half of farm income highs in 2013. Third, it was well below the long-run average (inflation-adjusted net farm income) of $81 billion. However, we noted some comfort could be taken in 1) the current estimate being above levels sustained during the Farm Financial Crisis of the 1980s and 2) the rate of decline had significantly slowed since 2016.

With that starting point, additional concerns about the farm economy mounted as the possibility of a Trade War, tariffs, and tumbling commodity prices became reality. With the USDA’s estimate of an $11 billion hit to the farm economy, perspective on the situation can be provided.

To do this, we simply took the USDA’s net farm income estimate in February of $59.5 billion and subtracted the USDA’s stated Trade War impact of $11 billion. Without accounting for adjustments in producer spending – which would have been limited given the tariffs went into effect in July-  one could reasonably consider the impacts on net farm income. Specifically, net farm income in 2018 could have fallen to the neighborhood of $48.5 billion, before the Trade Aid. How does this compare historically?

Figure 1 shows USDA’s net farm incomes estimates since 1929. These are inflation-adjusted dollars (2018). For reference, the orange line represents the long-run average. The black lines are one standard deviation above/below the average.

The red data point plots the $48.5 billion estimate of Trade War net farm income. This puts into  perspective how dire the situation could have become. At $48.5 billion, conditions would have been in line with those during the Farm Financial Crisis of the 1980s. Specifically, farm income would’ve been the lowest since sine 1983 ($30.7 billion) and 1980 ($41.9 billion). In 90 years of data, $48.5 billion would’ve been the 7th lowest value. In short, the Trade War, on its own, could’ve pushed net farm income, and the broader farm economy, to crisis levels. 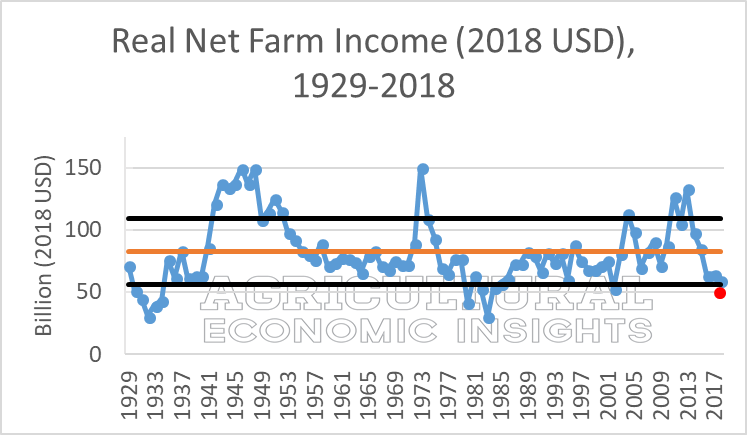 The USDA will release an updated forecast of net farm income in late August. This update will help provide a more clarity on where conditions stand.

As we noted last week, while the aid will likely offset the situation at the national-level, impacts will vary across regions and producers.

The early 2018 outlook signaled that another tough year was in store for the ag economy. Tariffs and falling commodity markets did nothing to improve that outlook. Given the early outlook and estimated Trade War impacts, net farm income in 2018 was headed toward levels last observed during the Farm Financial Crisis of the 1980s. Net farm income slipping below $50 billion would have sent major concerns throughout the farm economy.

The USDA’s plan to support producers with up to $12 billion in aid helps offset the impacts at the sector-level. It’s worth considering, however, just how bleak conditions could have been without this aid. The USDA’s estimate of net farm income later this month will provide more clarity.

Beyond 2018, one has to wonder what happens if trade relations don’t improve and the aid isn’t expended. If the full impact of the $11 billion Trade War continues into 2019 and aid isn’t extended, net farm income could again turn lower. Lower income would likely trigger additional adjustments in farm capital purchases, cash rental rates, and farmland values.

A Welcome Recovery in Wheat Prices