A Welcome Recovery in Wheat Prices 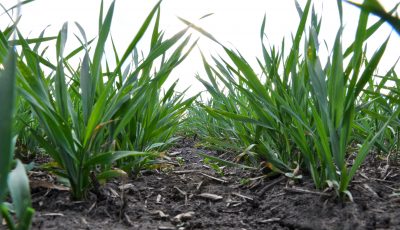 While attention has focused on the mostly bearish soybean market news, a welcome trend in wheat prices has been underway in recent years. While the economics of wheat production in recent years has not been overly positive – including historically low prices in 2016 and a downward trend in U.S. wheat acreage– corn and soybean production benefited from a small increase in wheat acreage in 2018. This week’s post considers recent wheat prices and the mostly silent, but welcome, positive story.

Every month the USDA reports the average price producers received for crops sold. Figure 1 shows this monthly average price for farm-level wheat prices since 2000. These data capture a wide range in wheat prices over the last 18 years. Before the boom, prices were often less than $4 per bushel. Prices peaked in early 2008 and spent most of 2008 -2014 above $6 per bushel. Keep in mind these data are nominal prices; not adjusted for inflation.

Most recently, prices reached lows in 2016. Wheat prices were less than $4 per bushel during the second half of 2016, hitting a low of $3.48 in September. Again, these are national average prices. Many producers undoubtedly faced local cash prices lower than these reported levels.  More broadly, conditions across the entire ag economy were quite bleak during late 2016.

From the lows of September 2016 to May 2018 highs, wheat prices have improved $1.91 per bushel. This is a 55% increase in prices in less than two years. The improvement has been significant for wheat producers and crop budgets. Furthermore, it has been a welcome improvement for the ag economy as acreage pressure on corn and soybeans reduces as wheat prices improve. 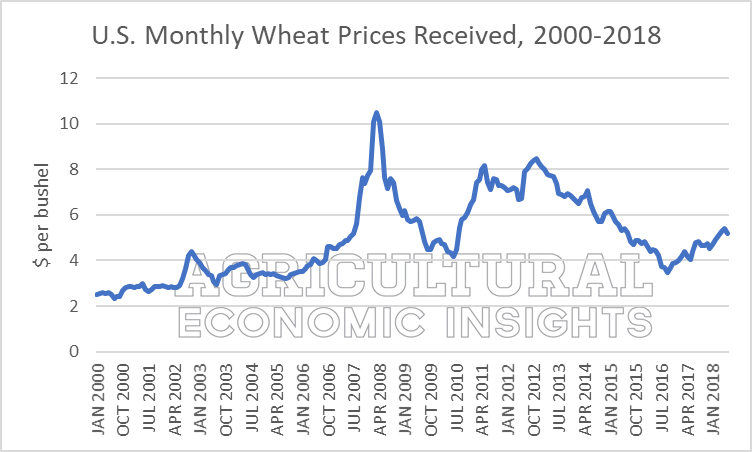 It is also insightful to consider prices relative to corn. Figure 2 graphs the monthly ratio of wheat to corn prices. As Brent pointed out in his 2016 post, wheat prices were extremely low relative to corn prices just two years ago. The low price ratio undoubtedly contributed to record low wheat planting in 2017 as producers looked for alternatives. Furthermore, wheat acres declined 4.5 million acres, or 9%, in a single year (harvest 2017 vs. harvest 2016).

At the low, the price ratio was 1.04 in July 2016. At these levels, wheat prices are barely higher than corn prices.

Since January 2018 the price ratio has exceeded the long-run average. Most recently, wheat prices were 1.44 times the price of corn. 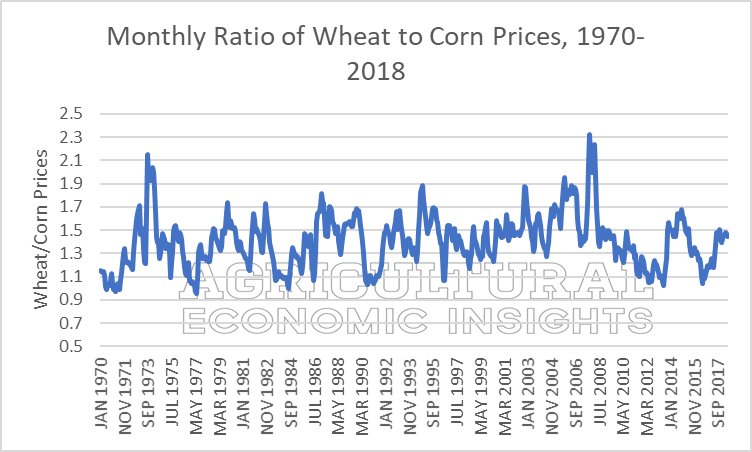 Stronger wheat prices have been an important – and perhaps overlooked – improvement in the farm economy. With winter wheat planting beginning soon, the improved economic outlook will be on producers’ minds. Higher prices and a higher price ratio will position wheat in a much stronger budget position than in recent years. Wheat acreage will be key to watch for 2019.