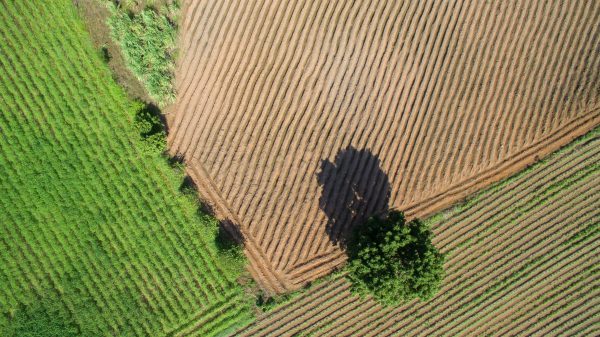 A significant driver of the farm economy boom was China’s surge in soybean consumption. This impacted U.S. and global markets as China relied on imports to meet domestic demand.  While we have previously examined these trends for soybeans (here and here), this week’s post considers the broad impact of China’s production and consumption trends across thirteen commodities. The results reveal a large acreage gap between China’s production and domestic consumption.

A quick note about the data. For this post, yield, harvested acreage, and domestic consumption data for thirteen primary crops were considered[1]. This is consistent with our earlier writing on global acreage trends.

Figure 1 shows China’s total harvested acres for these thirteen crops since 1990 (in blue). Over the last three decades, China’s acreage has been remarkably steady at nearly 290 million acres. This trend is different than what was observed at the global level as acreage expanded after 2000. For the current year (2018/2019), China is expected to harvest 288.8 million acres of these crops, or 12.5% of the global total.

The implications of equivalent consumption outpacing production (harvested acres) over multiple years are that China has relied heavily on imports. While this isn’t a new story, it’s perhaps a new look at the magnitude of China’s reliance.

Figure 2 is the difference between the data shown in figure 1. More specifically, this is the net acreage gap between harvested production and the domestic consumption equivalent. Again, notice China was mostly positive before 2000. This changed by 2008 when net acreage turned sharply negative.

In 2018/2019, China’s gap reached -124.3 million acres. Another way of thinking about this is relative to harvested acres (288.8 million). Currently, the gap represents 43% of harvested acres. Suffice it to say that China relies heavily on imports. 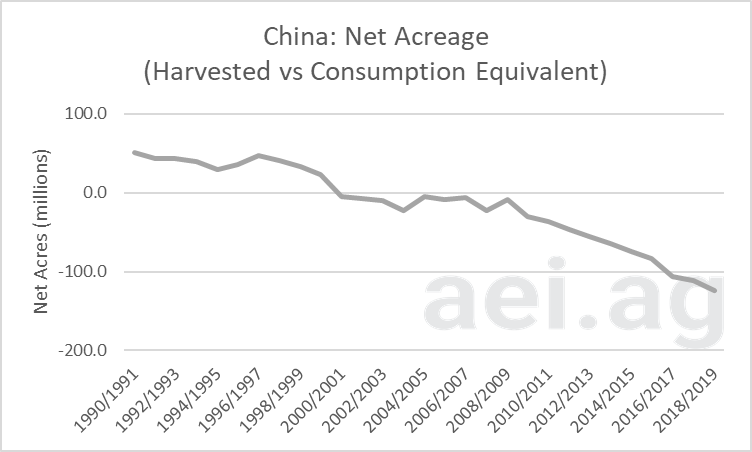 A final set of data considers how China’s acreage gap plays out across crops (Figure 3). These data are the average of the last five years. 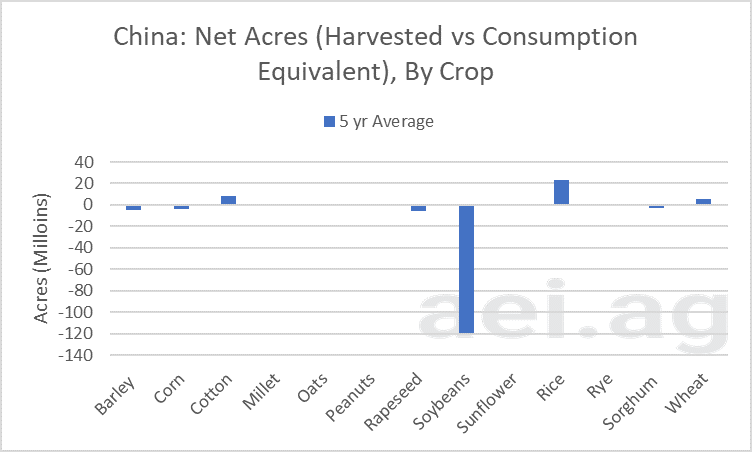 China’s boom in consumption and imports of soybeans has been a big story over the last two decades. Looking at this trend more broadly, China’s production relative to domestic consumption – considered at the acreage level- illustrates a heavy reliance on imports. Looking at individual crops, almost all of the gap is from soybeans. This is to say that China’s production of the other twelve crops has been closer to changes in domestic consumption.

Some will see China’s 124 million acreage gap as a weakness and vulnerability in light of the current Trade War. We think this misses the broader point. For a host of reasons – including political decisions and economic realities – China has bought soybeans from the rest of the world while total domestic consumption increased. This strengthened demand and increased exports of U.S. agriculture products-  especially soybeans. At some level, the current U.S./China Trade War changes the political and economic calculus that lead to the boom in China’s soybean imports.

Looking ahead, one must wonder whether the “acres needed” trend, shown in figure 1, continues. If so, for how long? It’s important to recognize this trend has been an important part of today’s global farm economy.

The Hard (or Easy) Part About Resolving…