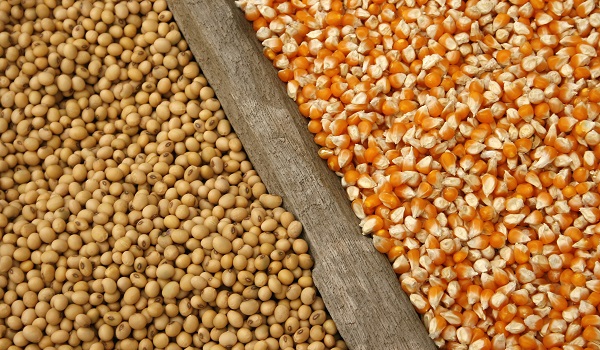 The Spring crop insurance price discovery period for corn and soybeans wrapped up at the end of February.  The final numbers show corn at $4.00 per bushel which is basically unchanged from the 2018 and 2017 values of $3.96.  Soybeans ended the period at $9.54 which is down 6.5% from 2018 and the lowest level since 2016’s $8.85.  The change in the price relationship is sure to get a few people thinking about where soybean and corn acreages might land in 2019.

The level of corn and soybean acreage for the last several years can be seen in Figure 1.  The figure shows planted acres of the two crops since 2000 and includes the initial 2019 USDA estimate.  Corn acres have exceeded 90 million acres 8 of 20 years shown.  The initial estimate of corn acres would rank as the 5th largest planting in this time period.  Soybean acres have only been in excess of 90 million acres once, in 2017.  Although forecasted to decline in 2019, if realized the 2019 forecast would be the 3rd largest soybean planting in this time period. 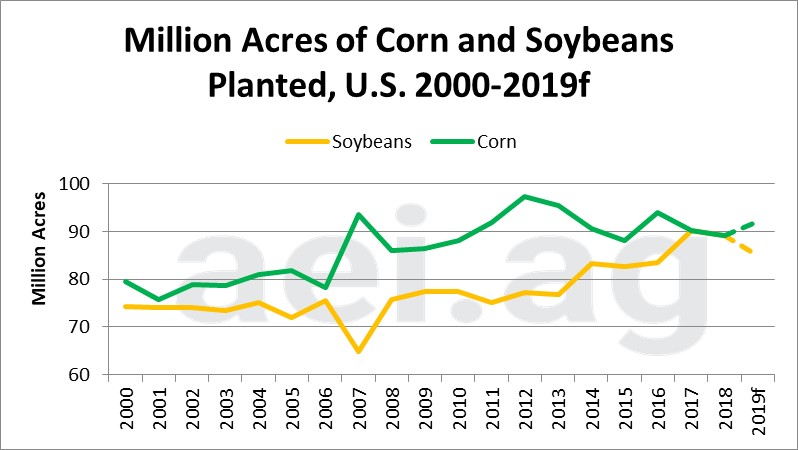 How do the Budgets Look?

In order to examine the implications of the crop insurance guarantees in more detail, we used the Purdue crop budgets for high productivity farmland to calculate the guaranteed revenue, variable costs, and net guarantee for both corn and soybeans.  The results for soybeans are shown in Table 1.  The net guarantee column shows the difference between the revenue guarantee assuming an 80% crop insurance policy and the price and the variable costs from the Purdue budget.  Years that would produce a net guarantee sufficient to cover land costs highlighted with a single asterisk, and those that would cover Purdue’s estimate of land and other fixed costs are shown with two asterisks. 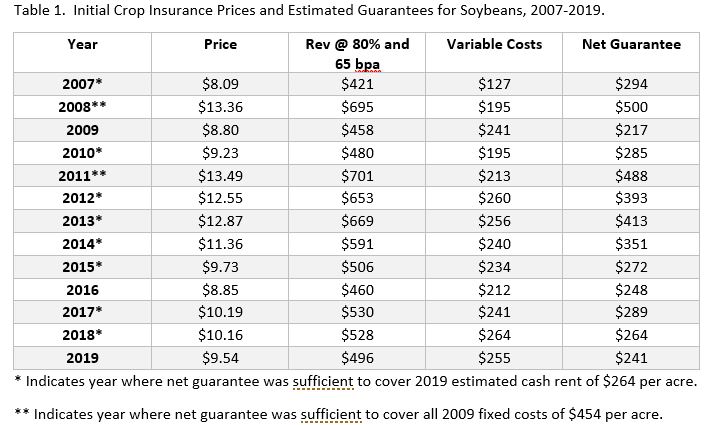 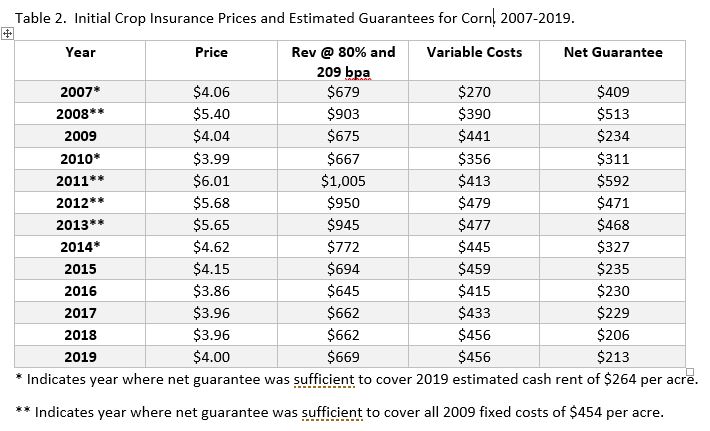 Figure 2 shows a graph of the difference between the net guarantees for soybean and corn production over time.  This is simply the difference between the last column of table 1 and table 2.  This figure shows that it is not uncommon for soybeans to have a revenue guarantee advantage relative to corn in the Indiana budgets.  For example, the soybean net guarantee has exceeded corn’s in each of the last 6 years.  The 2019 net advantage for soybeans is closest in magnitude to the advantages seen in 2014 ($23) and 2016 ($18).  In those years U.S. producers strongly favored corn and planted only 83.2 and 83.4 million acres of soybeans respectively. 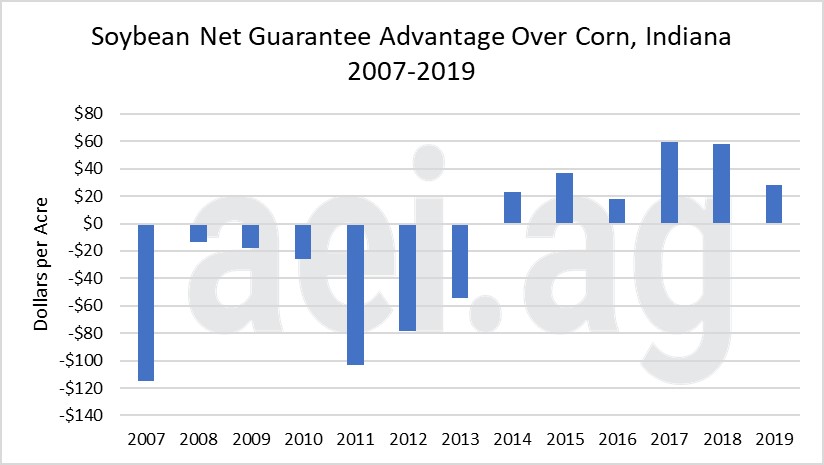 The Net Guarantee Likely Differs in Other Regions

It is very important to understand that the net guarantee advantage in Indiana is unlikely to be typical of that seen throughout the rest of the U.S. soybean production region.  This is due to a couple of factors.  Most importantly the cash basis relationship between corn and soybeans in Indiana is favorable to soybeans.  For instance, Purdue’s assumptions about corn and soybean cash basis levels show that soybeans are expected to sell at a cash basis of -$0.35 and corn a cash basis of -$0.25.  This is not likely the case for many other regions of the country.  For instance, in a post a few weeks ago we showed that the cash soybean basis for states such as North Dakota, South Dakota, and Nebraska show a much wider negative basis.  Additionally, the Purdue budgets always show a strong preference for rotation corn relative to continuous corn.  This is due to the yield premiums for rotation corn over continuous corn as well as cost savings.

The results of the revenue differences suggest that it is unlikely to see much of a swing in soybean acres in Indiana.  This was also obvious from our post a couple of weeks ago when we showed the average soybean acre switch over time.  Of the major soybean producing states, Indiana had one of the lowest soybean average acreage shifts in the country.  However, this does not mean that acres are unlikely to switch in other areas of the country.

The data indicate a negative relationship between the two variables.  In other words, when soybean prices are low relative to corn prices (movement to the left on the graph), corn acres tend to increase relative to soybean acres (move upward) and vice versa.

The 2019 soybean to corn price ratio is 2.38.  This is marked with an “x” on the graphic. Using the regression relationship, this level would imply that corn plantings will be roughly 111% of soybean plantings.  If you assume the USDA total corn and soybean acreage of 177 million acres it would produce roughly 83.6 million acres of soybeans and 93.3 million acres of corn. 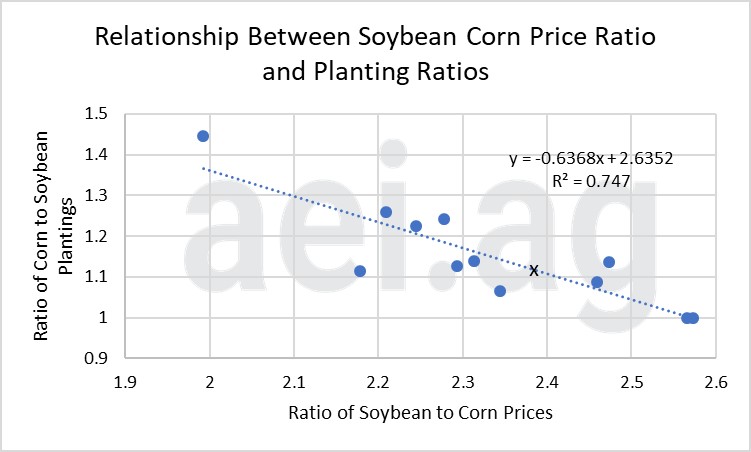 Figure 3.  The Relationship Between Soybean to Corn Crop Insurance Guarantees and the Corn to Soybean Acreage Ratio.

The 2019 Spring crop insurance price guarantees for corn and soybeans are now finalized. Compared to the last two years, the 2019 levels are virtually unchanged for corn but a bit lower for soybeans.  Although the Purdue budgets still show a slight advantage for soybeans over corn, the advantage is roughly in line with that seen in 2014 and 2016.  Given the differences in soybean and corn production profitability around the country, it seems likely that soybean acres will contract in 2019.

In 2016 the price ratio was even more favorable for corn than it is today.  The current price ratio is more in line with that seen in 2015.  In that year, US producers planted corn at a rate of 106% of soybean acres.  USDA’s current estimate is similar, with corn acres expected to be 108% of soybean acres.  This seems reasonable.

There are a couple of big questions to think about going forward.  First, how many total acres of corn and soybeans will get planted.  USDA is currently forecasting them to decline by 1 million acres from 2018.  Wheat prices are currently offering little incentive for additional wheat acres and there are always perpetual questions about the health of the winter wheat crop breaking dormancy.

The second big question is whether the price relationship between corn and soybeans will change.  Further deterioration in soybean prices relative to corn will likely continue to draw acres toward corn and may push soybean acres below 85 million. From 2014 to 2016 soybean acres ranged between 82.6 and 83.4 million acres.  At this point, a shift toward corn seems highly likely, but it remains to be seen how big the shift ultimately will be.  In our minds that will depend heavily on how strongly the market incentivizes it in the coming month.  Additionally, it will be important to carefully watch the planting weather as delays may mitigate some of the potential shift.  All this said, at this point, the message seems clear that we should expect fewer bean and more corn acres.

What is Median Farm Income?

Farm Income in 2019 Forecasted to Improve…