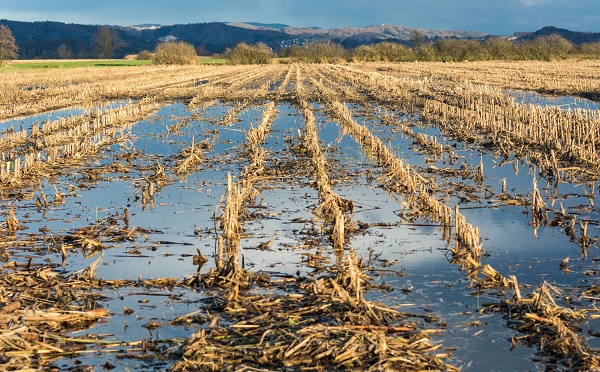 It seems the first hiccup of the 2019 growing season has been realized – planting delays. For producers waiting to get into the fields, this can be especially frustrating. With May more than half over and the U.S. corn crop less than half planted, persistently wet weather and the potential implications has come to the forefront. This week’s post reviews the latest planting progress data and summarizes a few implications for U.S. corn and soybean production in 2019.

It’s worth noting the USDA’s World Ag Outlook Board includes corn planting progress at May 15th as a variable in a corn yield estimate model they consider. Scott Irwin did a great job summarizing how the slow planting progress might have impacted the USDA’s May WASDE yield estimate. His estimate was that baseline yields – which starts at 176- might be 9.5 bushels per acres lower. His threads before the WASDE report, and after the WASDE- where the USDA didn’t adjust yields – are worth a read. We’re guessing that the USDA’s hesitated to pull 2019 yields lower given what happened in 2013. In that year, when planting progress at week 19 was the slowest on record, final yields were only slightly below trend (2 bushels below).

To summarize the late planting situation for corn, 2019 planting progress has been historically slow. If you were forecasting the probability of corn yields being below the USDA’s baseline of 176 bushels per acre, the delayed planting forecasts would (likely) lead you to lower your forecast. That said, we don’t think the data would suggest that a below-trend (176) yield – based on this information alone- is a 100% certainty.

When the USDA released it’s March prospective planting estimate, they assumed a more normal level of prevented planting acres. In other words, some of the potential increase from recent years has already been baked-in, so to speak.

Keep in mind that the high-water mark for prevented planting acres in recent years- 2013 – was 3.6 million acres, or 3.8% of total corn planted. A 1 percentage point movement – when expected corn acres are 92.8 million- is roughly equal for 930,000 acres. In other words, even if prevented planting approached 2013 levels, the U.S. would still plant north of 90 million acres of corn in 2019.

Since 1980, soybeans have, on average, been 22% planted at week 19. Nationally, this is the fifth slowest planting pace for soybeans (compared to third slowest for corn).

The yield impact of later planting soybeans is less clear. Specifically, the USDA’s model for forecasting soybean yields does not include a planting progress variable. We know that, at the field-level- planting too late impacts yields. However, the implication – at least at the national level- is that late planting doesn’t have explanatory power for national soybean yields. In its report, the USDA attributes this to soybean’s “wider window for soybean reproduction.”

What about Corn Acres Switching?

Something we often hear as planting weather delays set in is the idea producers will switch acres planned for corn into soybeans. This makes senses anecdotally, but it’s worth stepping back a bit and considering the data. Since 2007, prevented planting acres of corn (1.8% of planted acres) has been larger than that of soybeans (1.2% of planted acres). In fact, in many years prevented planting corn acres well-outpaced soybeans. This piece of data seems to contradict the idea that producer will just roll late corn acres into soybeans. We aren’t saying it doesn’t or won’t happen, but be careful with that assumption.

For a host of reasons, 2019 is setting up to be a memorable one. With respect to the late planting season, there are a couple of key points to keep in mind.

First, planting pace is slow, but not “off the charts.” Weather delays have been more painful for corn than soybeans. Also, the Eastern Corn Belt has been harder hit.

Second, delayed planting has set the stage for potential corn yield reductions at the national level. That said, below-trend yields in 2019 are far from a certainty. Summer weather is still in play. For soybeans, the impact on national yields isn’t clear. Of course, it will be late summer until the first firm yield forecasts are available.

Prevented planting acres are a second area that could trim 2019 production. Keep in mind there are 1) changes from recent years and 2) changes from long-run averages. The USDA March prospective planting estimates have included assumption closer to long-run averages. Also, corn has, historically, seen more prevented planting acres than soybeans (when measured as a percent of planted acres). It’ll be the June 28th Acreage Report when we get a closer, updated look at potential acreage impacts.

Finally, as crop insurance planting dates approach, many producers will have difficult production decisions to make. The first step is reaching out to their crop insurance providers (click here for final crop insurance dates for corn and soybeans). At this point, it’s also not clear how any potential USDA trade aid payments might fit into prevented planting decision.

In summary, weather delays will force many producers to face “to plant, or not to plant” decisions as corn final planting dates approach. May 25 (Western Corn Belt), May 31 (Central Corn Belt), and June 5 (Eastern Corn Belt) are key dates. At the national level, the impacts on 2019 production are far from clear and it will be many weeks – if not months – before the scale is known.

[1] These data were trend-adjusted yields since 1960. This is an important point that we’ll discuss in an upcoming post.

[2] Speaking of 2013, the Western States got hit hardest in 2013. Specifically, 2013 was the slowest corn planting pace for Iowa and Minnesota.

The Knowns and Unknowns: A Guide to…