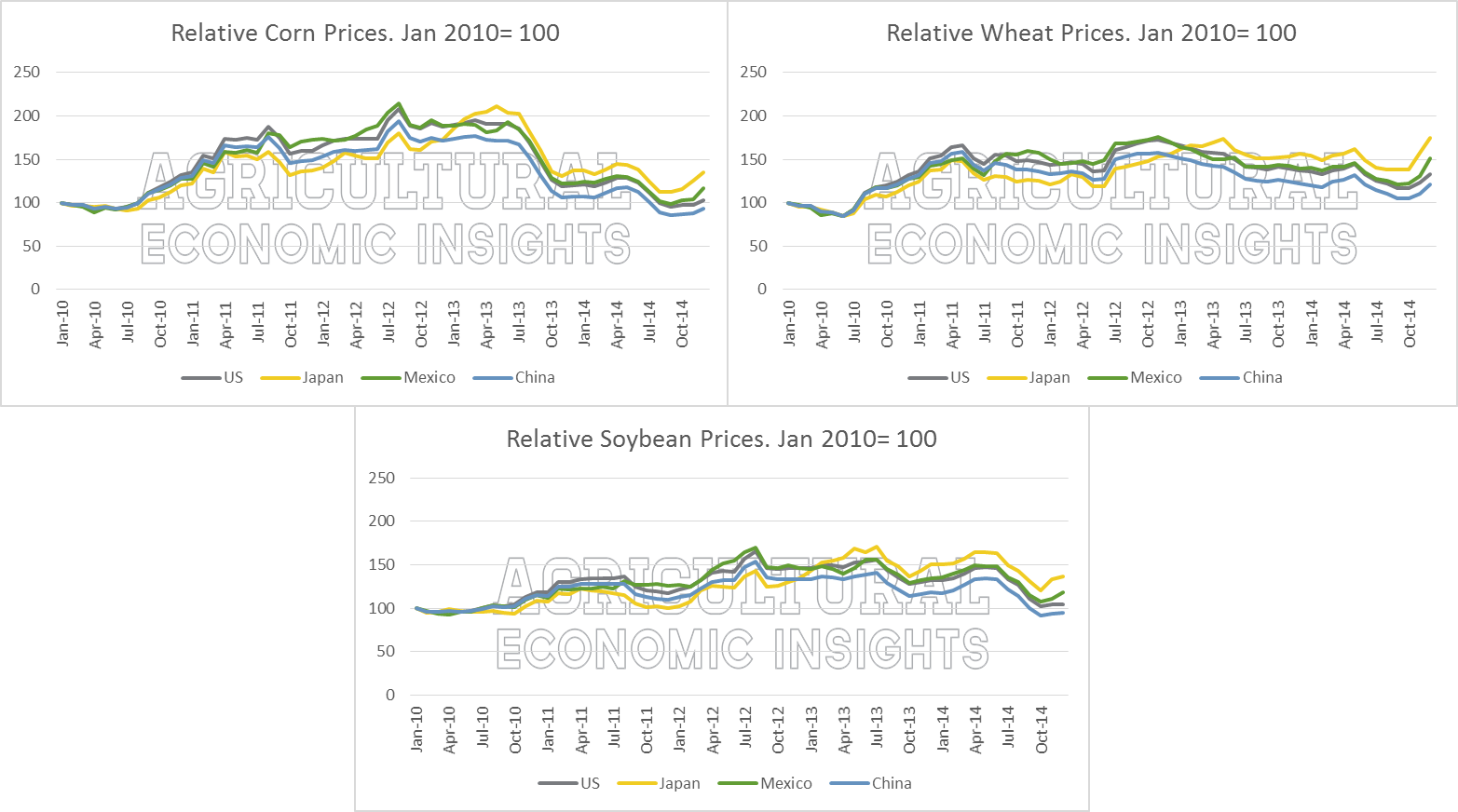 Since 2011 the U.S. dollar has begun to strengthen.  Because exports are a critical component of grain demand, we decided that it would be important to look at how strength in the dollar impacts the prices that foreign buyers of U.S. grain face.

The most recent USDA WASDE projection is for exports to account for 12.9% of corn usage, 48.3% of soybean usage, and 43.8% of wheat usage. There are many different factors that influence exports. In addition to the shipping fees, port charges, fuel surcharges, tariffs, quota, and embargoes, exchange rates can play a critical role and they are sometimes hard to put in perspective.

Say a grain buyer in Mexico wants to buy U.S. corn. They would need to price the corn (in U.S. dollars), arrange transportation, mind all trade regulations and fees, and then consider the exchange rate. The exchange rate is how much it would cost the Mexican grain buyer purchase the U.S. dollars he needs to buy the corn. This gets tricky; not only are they buying corn, but they are also buying U.S. dollars.

Like the commodities, currencies are traded on exchange markets. The prices change based on global the global supply and demand of various currencies.  Just as some commodities rise while other fall, currencies do the same. Figure 1 is the trade weighted value of the U.S. dollar against other major currencies, as published by the Federal Reserve Bank of St. Louis. Overall, a trend line through this series would show that, since 1970, the U.S. dollars has weakened, or become cheaper, relative to other major currencies.

In general, if you want to buy something abroad, a weak U.S. dollar is bad – you have to spend more U.S. dollars to buy the other currency to then make your purchase. Conversely, if you want to sell something abroad, a weak U.S. dollar is helpful – your buyer needs less of their local currency to buy the U.S. dollars needed for your good or service. With the exception of a couple of run-ups in the mid-1980s and early 2000s, the dollar has been trending weaker.  More recently, since 2011, the U.S. dollar has begun to climb out of its more than 40 year low.

To look at the how the dollar affects the price of U.S. grain exports, we calculated the relative cost of corn in different countries over time. In figure 2, we took the monthly USDA-NASS average cash price for corn, wheat, and soybeans in the U.S. and converted it to the local currencies for Japan, Mexico, and China. The data are monthly and span from January 2010 to December 2015. To see how these prices changed over time, we presented them all relative to January 2010 (2010 is the base year; 2010=100). The data are the exchange-rate adjusted prices for each currency over time, relative to the base year. So if the exchange rates were constant, the lines would all move up and down exactly with the U.S. price.

While the relative price for soybeans in the U.S. dollar in late 2014 was nearly the same as it was in January 2010 (both around 100), the relative price of soybeans for the Japanese Yen was 136.5, considerably higher than the base period because of changes in the exchange rates.

For a look at what happened in 2014 alone, figure 3 shows only 2014 and uses the base period of January 2014. For corn, the U.S. relative price of corn in December 2014 was 85.3, or 85.3% of the price in January. U.S. corn producers are feeling that impact. However, the relative price of Japanese Yen adjust corn in December was 98.1; 98.1% of the price in January. Similar the Mexican Peso adjusted corn price, 93.75. In both cases, while the price of the commodities in the U.S. was considerably less in December, the major export partners have seen only a slight decline in prices.

Wrapping it all up

Several factor go into the how grain is sold and shipped around the world, but price is an important component. And while recent U.S. prices seem low, even from just a year ago, it’s important to think about how exchange rates impacts the currency adjusted price. As the U.S. dollar has strengthened, it has made U.S. grain relatively more expensive.

In short, the dollar has been strengthening and will create pressure on the grain markets as a more costly U.S dollar makes U.S. commodities also more costly. Given the current market situation with building inventories, a slow-down in export activity will be seen as bearish market news. Another key factor will be how the U.S. dollar hold up to currencies of other major exporters.

Just as we noted that interest rates could be the next threat to farmland values, keep an eye on the dollar.  These two factors are related.  If the dollar continues to strengthen it could be drag on the grain markets, and potentially farm incomes in the coming months and year.

Aging American Farmers and Their Farmland