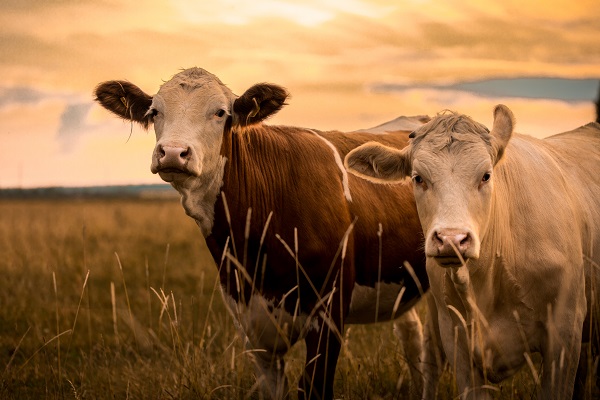 Figure 1 shows the difference in cash receipts for 2018 compared to the high observation from 2010 and 2018. This measure is one way of considering how significant the farm economy slow down has varied. As we have noted in several posts (here and here), conditions for wheat production has been particularly challenging. Cash receipts in 2018 were 45% lower than the highs observed in 2012. It is worth noting that wheat cash receipts in 2018 are actually 5% higher than the lows reached in 2017.

Corn has also experienced a large decline with cash receipts down one-third from 2012 highs. Outside of crops, livestock producers have also been hard-hit. Cash receipts for cattle and calves (-18%), hogs (-25%) and dairy (-29%) have faced significant declines from 2014 highs.

Perhaps the data-point that stands out the most is soybeans with only a 9% drop in cash receipts from the highs. Keep in mind that these data are cash receipts- or a measure of annual sales. It will take some time for the full impact of the decline in soybean prices in 2018 to work its way into the data. Furthermore, changes in these data are driven by price and quantity. More on that later. 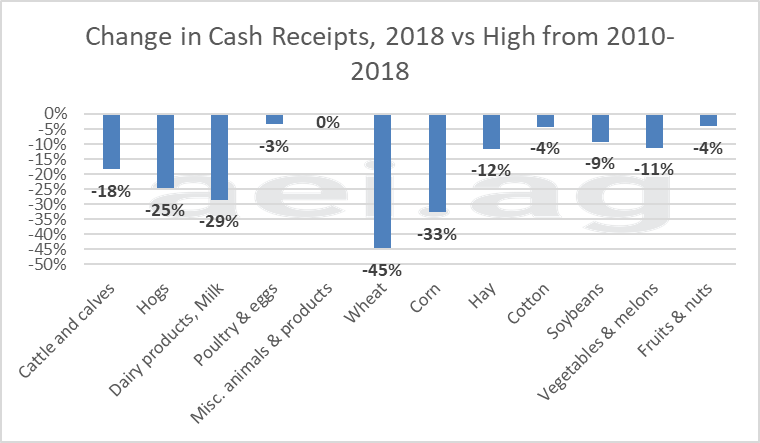 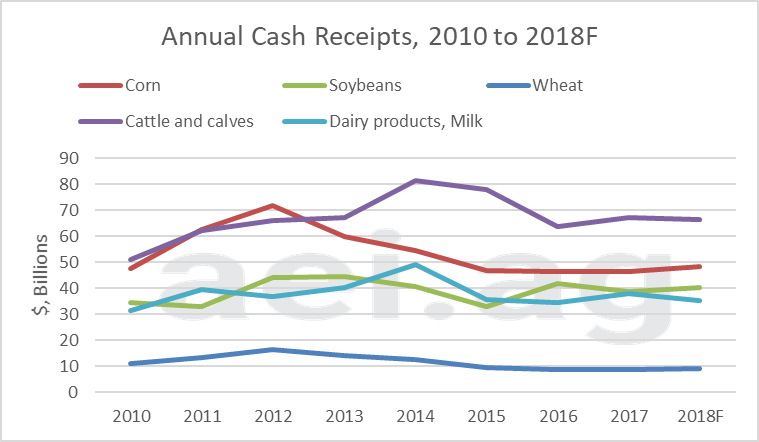 While the data presented in figures 1 and 2 are informative, they are not a perfect measure of farm-level conditions. Specifically, changes in area planted has a large impact on annual cash receipts. Soybean production, for example, has increased by more than 12 million acres over the last nine years. The increased production has masked declining field-level economics.

Table 1 uses USDA data that considers acre-level revenue and returns for corn, soybeans, and wheat. Specifically, the data considered were 2010 to 2017 (2018 data are not yet available). Furthermore, these data are national averages.

The first column shows the difference in per-acre revenue comparing 2017 to the high from 2010 to 2017. Wheat, again, was hardest hit with a 41% decline in per-acre revenue. The acre-level impact for corn and soybeans, however, is much closer than shown in figures 1 and 2. Specifically, corn revenue in 2017 was 26% lower than the earlier high, while soybean revenue was 24% lower.

The middle column shows the change in revenue for 2017 compared to the average per-acre revenue from 2010 to 2013.

Again, the impacts were most dramatic for wheat with a 44% decline in contribution margin. Soybeans have also shown a significant decline, contracting 22%.

As we noted in an earlier post, it can be difficult to capture and articulate the impacts of the current farm economy slowdown. In many cases, data that captures farm-level impacts and conditions can be challenging -if not impossible- to capture.

Commodity cash receipts are important and helpful measures. Furthermore, these data are frequently updated.  Cash receipts have captured sharp declines and significant challenges for producers of wheat, corn, cattle and calves, hogs, and dairy. However, recent data have understated the challenges for soybean production, which has increased acres even with significant revenue and contribution margin declines.

Is the World More Reliant on Ag…

A Quick Look at the Difference in…